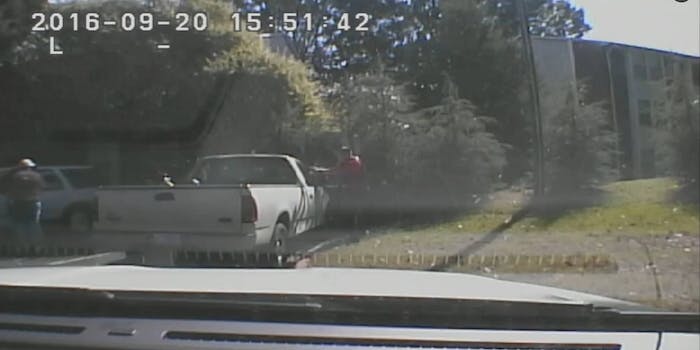 Officials had just seven days to release the video to the public, lest it become personnel record.

Authorities in Charlotte, North Carolina, have agreed to release bodycam and dashcam footage depicting the shooting death of Keith Scott. The decision came about with just days to spare before such footage would be removed from public records and instead reclassified as personnel records due to the implementation of HB 972, set to take effect the first day of October.

The 43-year-old was shot on Tuesday outside the Village at College Downs apartment complex by Officer Brentley Vinson, who claimed that Scott was armed. His family has contested that statement and instead claims that Scott was in his car reading a book. Both Vinson and Scott are African-American.

On Friday, Scott’s wife Rakeyia released her own cellphone footage of the incident to media outlets. The video itself includes audio of a gun being fired, though there is no visual depiction of Scott being shot.

Despite initially stating that law enforcement footage would not be released, officials appeared to have a change of heart over the weekend and released the footage late Saturday afternoon.

#BREAKING: CMPD has released the video of the fatal shooting of #KeithLamontScott. WATCH IT HERE: https://t.co/1C8NIVRHeV #WCCB

North Carolina Gov. Pat McCrory came out in favor of this decision, issuing a statement a few hours prior.

.@PatMcCroryNC says in statement "I concur with the Charlotte police chief's decision to release the tapes." @WNCN pic.twitter.com/ko52tA20XM

McCrory’s position is curious given his signing of HB 972 in July, which forces law enforcement to jump through incredible hoops in order to release footage of police shooting incidents obtained from sources like dashcams and bodycams. Under HB 972, Charlotte Police Chief Kerr Putney and anyone else in a similar position in the state of North Carolina would have to take the videos to court.

A judge must then determine whether to release the footage based off of eight standards laid out within the law itself, ranging from a video’s legal significance to whether the release “may harm the reputation or jeopardize the safety of a person.”

The bodycam footage released depicts the moment the camera was turned on all the way to when officers were administering aid to Scott. The dashcam footage follows a similar timeline. Both of those videos are embedded below.