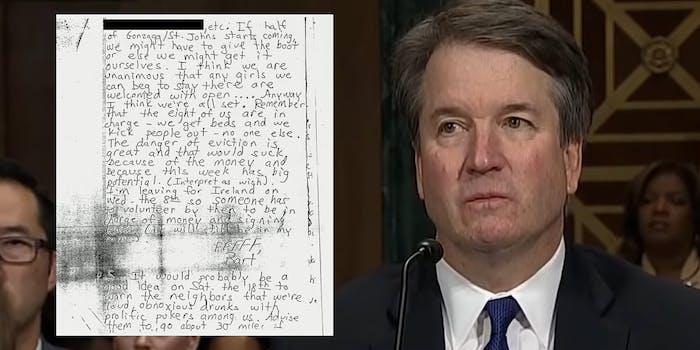 A letter from a high-school aged Judge Brett Kavanaugh has surfaced, detailing plans for Beach Week celebrations, according to the New York Times.

Written on what looks to be college-ruled loose leaf paper, the letter discusses the lease for the Ocean City, Maryland condominium Kavanaugh and his high school crew had rented for the post-graduation week of partying.

The letter starts out listing the loose ends that need tying before the festivities; the remaining money owed on the rental, details for securing the lease, even a reminder that the revelers must bring their own sheets and towels.

Then comes the good stuff.

“I think we are unanimous that any girls we can get to stay there are welcomed with open…Anyway,” an ellipsis leaving what exactly is “open” up to the imagination.

“The danger of eviction is great,” young Kavanaugh reminded his friends, “and that would suck because of the money and because this week has great potential. (Interpret as wish).”

The postscript of the letter says that someone in the group should “warn the neighbors that we’re loud, obnoxious drunks with prolific pukers among us. Advise them to go about 30 miles…”

The final part of the letter goes against what Kavanaugh has said about his drinking and the effect it had on his body. During last Thursday’s hearings, Kavanaugh said that he sometimes threw up due to having a weak stomach.

Predictably, Twitter users ran with news of the letter’s release.

Corroboration and multiple women with the same accusation. Oh and Kavanaugh's HS letter signed FFFFF Bart the obnoxious puking drunk planning beach week. Any parent of a teenager can see he's defiant, rude and lying his ass off:

Bart (Brett) Kavanaugh’s 1983 letter offers inside look at High School Clique: He mis-represented himself while in high school. He tells his friends about beach week “Warn the neighbors that we’re loud, obnoxious drunks with prolific pukers among us. Advise them to go 30 miles.”

In an unexpected promotional move–designed to curry further favor among young white males of privilege for the Kavanaugh nomination–Trump has announced #BeachWeek to replace #InfrastructureWeek.

Brett Kavanaugh's handwritten note to friends re Beach Week says that whoever arrived first at the condo in Ocean City should "warn the neighbors that we’re loud, obnoxious drunks with prolific pukers among us."

The letter is even signed “Bart,” Kavanaugh’s nickname, and the name his friend Mark Judge used for his friend and drinking buddy in his memoir. In his testimony, Kavanaugh denied he was the “Bart” in question.