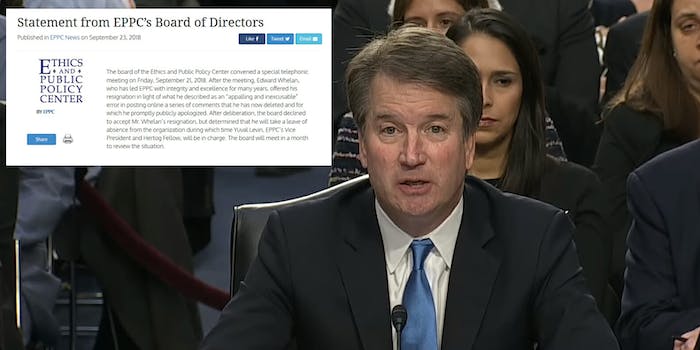 He also apparently offered to resign as president from a conservative think tank.

Ed Whelan, the lawyer who posted a bizarre theory suggesting Dr. Christine Blasey Ford mistook Supreme Court nominee Brett Kavanaugh for someone else amid her sexual assault allegations, is taking a “leave of absence” from the think tank he is the president of.

The Ethics and Public Policy Center announced on Sunday that Whelan will take a “leave of absence” just days after his theory, which he published on Twitter and which sparked an intense backlash. The think tank said Whelan offered his resignation, but they declined to accept it.

“After deliberation, the board declined to accept Mr. Whelan’s resignation, but determined that he will take a leave of absence from the organization during which time Yuval Levin, EPPC’s Vice President and Hertog Fellow, will be in charge,” the organization said in a statement.

The Ethics and Public Policy Center’s board of directors will meet in a month to “review the situation,” according to the statement.

Whelan posted the theory about Kavanaugh and Ford late last week, where he used maps, floor plans, and photographs of a former classmate to essentially argue that Ford mistook the now-Supreme Court nominee for someone else.

In response, Ford said there was “zero chance” she confused the two men and Whelan deleted the Twitter thread and apologized.

Before the deletion of the tweets, Fox & Friends discussed the “mistaken identity” theory.