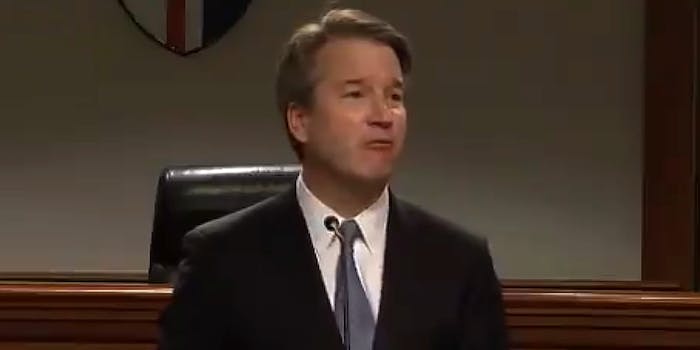 The joke doesn't look good in light of sexual assault allegations against Kavanaugh.

A video clip of Supreme Court nominee Brett Kavanaugh joking about his alma mater, Georgetown Prep, surfaced this week, and people are reading into it a great deal.

Kavanaugh: “We had a good saying that we’ve held firm to to this day as the dean was reminding me before the talk, which is what happens at Georgetown Prep stays at Georgetown Prep. That’s been a good thing for all of us.” pic.twitter.com/c1oWLzG4l9

During a speech at Columbus School of Law at Catholic University in 2015, Kavanaugh joked, “We had a good saying that we’ve held firm to this day, as the dean was reminding me before the talk, which is what happens at Georgetown Prep stays at Georgetown Prep. That’s been a good thing for all of us.”

Kavanaugh made the remark in the context of discussing friends of his from Georgetown Prep who also attended Columbus School of Law.

Kavanaugh is accused of sexually assaulting Dr. Christine Blasey Ford while he was a student at Georgetown Prep. He has unequivocally denied that the incident occurred, even claiming that he was not at the party in question.

Kavanaugh’s friend Mark Judge, who Dr. Ford also alleges was involved in the assault, has detailed his teenage escapades in two books, and references a young man who he calls “Bart O’Kavanaugh,” who “puked in someone’s car” and “passed out on his way back from a party.”

Kavanaugh made similar remarks at a speech to the Federalist Society at Yale Law School in 2014. In reference to a group trip to Boston that Kavanaugh organized while at Yale Law that involving binge drinking, Kavanaugh said, “Fortunately for all of us, we had a motto, what happens on the bus stays on the bus. Tonight, you can modify that to what happens at the Fed Soc after-party stays at the Fed Soc afterparty.”

A hearing on the allegations has been proposed for Monday, but Dr. Ford has said she hopes there can be an FBI investigation before she testifies in front of the Senate.