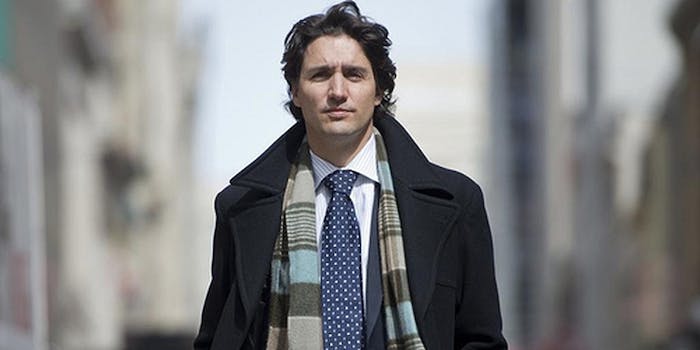 Justin Trudeau seeks to differentiate himself from other party leaders by being more active on Facebook and Instagram.

Canada’s next federal election may be two years away, but the race is already starting across the country and online. And one candidate is poised to change how Canadian politics works online, according to University of Calgary political science professor Tom Flanagan.

Justin Trudeau, 41, is the leader of the Liberal Party of Canada and a member of parliament representing the Papineau electoral district in Quebec. He will take on current Prime Minster Stephan Harper (Conservative Party) and New Democratic Party leader Thomas Mulcair in 2015 as each party tries to gain a majority in the House of Commons. Unlike American presidential candidates, who have to get votes (and likes) from across the country, in Canada Trudeau will only be on the ballot in his home district of Papineau, just like Harper will only be on the ballot in Calgary Southwest. After the federal election elects a new parliament, the governor general (who represents the Queen) appoints a new prime minster, which is more often than not the leader of the majority party in parliament.

Although all three men are big names in Canadian government, up until now social media has been somewhat of an afterthought. As Flanagan explains, Canadians have less of a direct relation with their leader than Americans have with the president, so Americans are more likely to seek out their chief executive on social media.

“The looser organization of American parties has allowed Mr. Obama to use social media to foster horizontal links among voters. His messages have encouraged Democrats to form local discussion groups, to hold coffee parties to recruit potential supporters, to organize rallies, to make telephone calls and to raise money from their friends to support the cause,” Flanagan wrote in The Globe and Mail. While using the Internet and social media to appeal directly to voters is nothing new in the United States, it’s unchartered territory north of the border, and so far, Trudeau has the lead.

All three primary candidates (plus two minority party candidates) have a presence on Facebook, with Trudeau and Harper taking the lead in the likes race. Trudeau has more than 90,000 likes, and Harper isn’t far behind, but the former has two major advantages: For one, he has a rapidly growing image in Canada and on Facebook. Secondly, he has a very famous last name in Canada; his father was Prime Minister in the 1970s and 1980s.

But in order for Trudeau to really stand out on social media, according to Flanagan, the Liberal Party has studied the social media moves of the Obama campaign. This month, Trudeau used the Internet to appeal to voters and connect with them in a new way – crowdsourcing questions for the parliament’s Question Period. He kicked off the effort on YouTube.

A look at Trudeau’s Facebook reveals a command of Instagram and numerous attempts to push hashtags, especially during his successful quest to be leader of the Liberal Party earlier this year. Flanagan said Trudeau has youth, looks, and likability on his side, and that could only help him with the younger generation – just like Obama. Now, it’s just a matter of getting past obstacles of Canadian politics, including what Flanagan called a lack of connection between the public and their prime minister, and bringing in the likes.

“If Mr. Trudeau’s social media team can surmount the inherent obstacles of the Canadian system, it will give them a step up over the other parties,” he concluded.