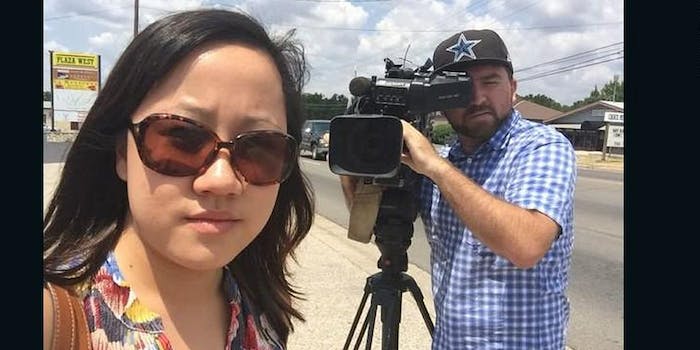 After two WDBJ-TV reporters were shot and killed Wednesday morning during a live TV news broadcast in Virginia, the hashtag #WeStandWithWDBJ began circulating among fellow journalists on social media.

Their colleagues and a nation full of journalists are in mourning after 24-year-old reporter Alison Parker and 27-year-old photojournalist Adam Ward were slain during the morning news.

News crews: join us in saying #WeStandWithWDBJ. Proud & not afraid to be a journalist today. #TV #WDBJ @WDBJ7 @KVUE pic.twitter.com/um11SgrtBh

As news of the shooting broke Chen was in a state of shock realizing how close to home the story was.

“It’s unimaginable what the producers experienced in the control room and the anchors on the anchor desk. Not to mention the shock for viewers at home,” Chen told the Daily Dot.

When she and her photographer were on assignment Wednesday the tragic events that morning were constantly on her mind. However, Chen was soon overcome by a sense of pride, she says.

Pride in being a journalist.

It came as a surprise to the Austin-based journalist when she was joined by reporters across the country standing with WDBJ, the station grieving the loss of their friends and colleagues.

Photog Mark and I proud & not afraid to be a journalist today. #westandwithwdbj pic.twitter.com/QCNuwRfRTB

When initially tweeting the hashtag, it wasn’t gun control, mental health, or workplace violence that came to Chen’s mind, she said. “It was just me, as a fellow journalist and human being, doing one tiny thing to ease the pain for myself and show support for others who I knew were feeling that same pain,” Chen said.

Chen has been overwhelmed by the nice comments she has received, and the spread of the hashtag, but above all she hopes Alison and Adam’s families can find comfort in the support.

Many were impressed by the grace of those at WDBJ as they continued to report on the tragedy on the air and on social media.

The employees of #WBDJ are reporting on this senseless tragedy with such poise and grace. Our hearts ache with yours @WDBJ7.

Our thoughts here at the Daily Dot are with Alison and Adam’s families and friends, as well as their colleagues and nationwide media family.