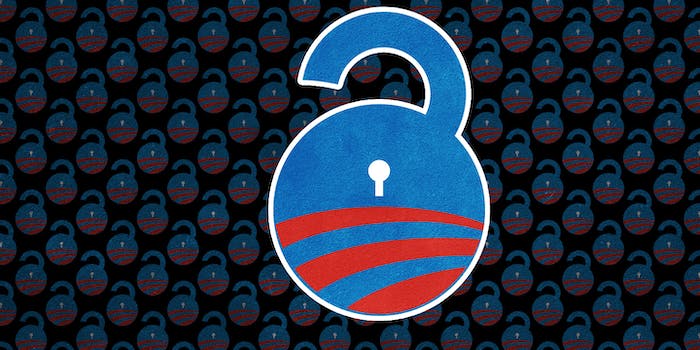 But Apple is not backing down.

At a press briefing on Wednesday, White House Press Secretary Josh Earnest defended the Department of Justice’s efforts to force Apple to unlock an iPhone belonging to one of the terrorists who carried out the San Bernardino shooting.

“[What] the Department of Justice is requesting… [is] not asking Apple to redesign its product or to create a new backdoor to one of their products. They’re simply asking for something that would have an impact on this one device,” Earnest said. “Department of Justice and FBI investigators have been given a serious responsibility, which is to investigate an act of terrorism… they can count on the support of the White House and the president… we’re going to support them as they do their important, independent work.”

There is an intense debate right now about how to balance the need for encryption and cybersecurity and protecting privacy, and the need to protect the national-security of the United States… I think the President has described how he approaches that question, but fortunately, the question in this instance is much more narrow.

Earnest’s comments come in reaction to Apple’s announcement that it will not comply with a court order mandating the Silicon Valley-based tech giant to design a custom software package that would allow law enforcement officials make an infinite number of brute force attempts to guess the password to unlock the device that belonged to Syed Rizwan Farook without triggering a security feature automatically erasing the contents of the phone after 10 incorrect attempts.

Dan Guido, the CEO of the cybersecurity firm Trail of Bits, told the Daily Dot that, because Farook had an older version of the iPhone lacking an additional feature to prevent brute force attacks called Secure Enclave, Apple could comply with the court order with relative technical ease.

However, in a forceful response released on Tuesday, Apple CEO Tim Cook charged that complying requires the creation of an entirely new software package that has the potential to make every iPhone on the planet less secure.

“The FBI wants us to make a new version of the iPhone operating system, circumventing several important security features, and install it on an iPhone recovered during the investigation. In the wrong hands, this software—which does not exist today—would have the potential to unlock any iPhone in someone’s physical possession,” Cook wrote. “The FBI may use different words to describe this tool, but make no mistake: Building a version of iOS that bypasses security in this way would undeniably create a backdoor. And while the government may argue that its use would be limited to this case, there is no way to guarantee such control.”

Cook’s letter went on to argue the exact opposite point made by Earnest—that the effects wouldn’t be contained to a single device. “Some would argue that building a backdoor for just one iPhone is a simple, clean-cut solution. But it ignores both the basics of digital security and the significance of what the government is demanding in this case,” he insisted. “The government suggests this tool could only be used once, on one phone. But that’s simply not true. Once created, the technique could be used over and over again, on any number of devices. In the physical world, it would be the equivalent of a master key, capable of opening hundreds of millions of locks—from restaurants and banks to stores and homes. No reasonable person would find that acceptable.”

Unlike telephone companies, firms producing products like smartphones are not required to structure their systems from the outset in such a way that information can be provided to the government. In this particular case, the judge relied on a piece of legislation dating back to 1789 called the All Writs Act, which gives the government authority to compel a company to take a specific action—such as creating software that allows for the unlocking of a smartphone—when there are is no specific statute or law dealing with the issue at the hand as long as there are extraordinary circumstances and the compliance is “not an unreasonable burden.”

Under Cook’s leadership, Apple has been one of the loudest voices in the tech community pushing back against governmental attempts to mandate backdoors—asserting that any action that weakens encryption places just such an unreasonable burden on companies with an obligation to keep the data of their customers secure.

“I want to be absolutely clear that we have never worked with any government agency from any country to create a backdoor in any of our products or services,” Cook wrote in the company’s privacy policy. “We have also never allowed access to our servers. And we never will.”