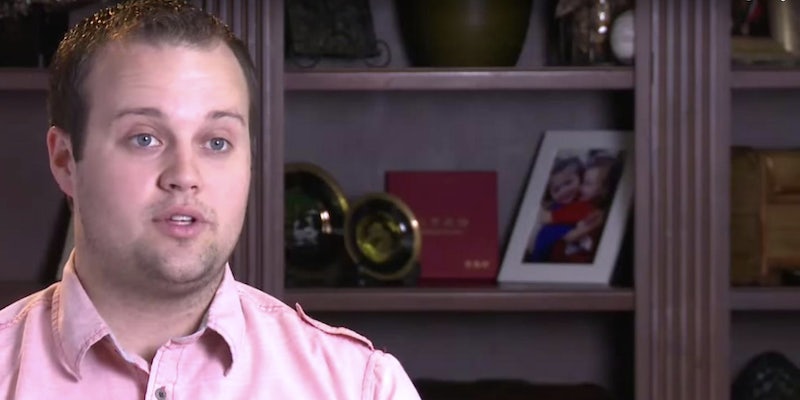 Josh Duggar‘s name has been linked to Tuesday’s Ashley Madison data dump—one that served to out the site’s users. It’s the latest in what’s been a miserable summer of headlines for the reality TV star.

The former executive director of the anti-gay/abortion/divorce Family Research Council’s lobbying arm, FRC Action, and the eldest kid on TLC’s reality program 19 Kids and Counting had already been doing his best damage control. Just nine days after the show’s May 12 episode revealed that he and his wife were having a fourth baby, the magazine In Touch Weekly revealed that he’d molested five girls when he was 14 and 15 years old, and that four of them had been his sisters.

He lost his position with FRC Action, and TLC cancelled 19 Kids. Now Duggar’s name has come up in the hacked data and linked to two accounts on the affair-arranging website, Ashley Madison.

While one account was registered with a birthday one month from Duggar’s real one, and the other one was registered one day off, the attempt to game the system with the old “that’s not my birthday” trick was foiled by evidence that a credit card in his name had paid for the two accounts.

Credit cards apparently registered under a Joshua J. Duggar paid a total of $986.76 for the subscriptions, the last of which was canceled in May. The billing addresses reportedly match Duggar’s home in Oxon Hill, Maryland, and grandmother’s home in Fayetteville, Arkansas.

According to Gawker‘s examination of the data, the profile registered under Duggar’s name had been game for a diverse batch of sexual activities.

“Conventional Sex,” Experimenting with Sex Toys,” One-Night Stands,” “Open to Experimentation,” “Gentleness,” “Good With Your Hands,” Sensual Massage,” “Extended Foreplay/Teasing,” “Bubble Bath for 2,” “Likes to Give Oral Sex,” “Likes to Receive Oral Sex,” “Someone I Can Teach,” “Someone Who Can Teach Me,” “Kissing,” “Cuddling & Hugging,” “Sharing Fantasies,” “Sex Talk.”