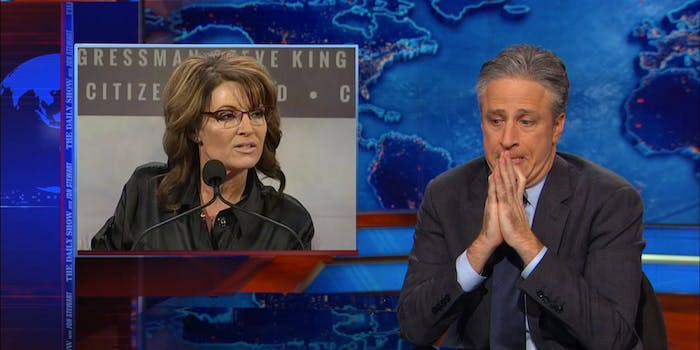 She loses her teleprompter—and something incredible happens.

The next presidential election isn’t for another year and a half, but that isn’t stopping potential 2016 candidates from putting their names into the race as early as possible.

While Jeb Bush and Mitt Romney were nowhere to be seen, many other Republican hopefuls spoke at Monday’s Iowa Freedom Summit, providing plenty of fodder for Jon Stewart, who can probably do this schtick in his sleep by now. Stewart found gold in practically every word, but the pièce de résistance for him was Sarah Palin’s “incoherent” speech, which went further off the rails than usual when her teleprompter cut out and she had to ad lib.

It only went downhill from there.

“It was all going fine,” Stewart intoned, “until tragically her subjects stopped talking to her verbs.”