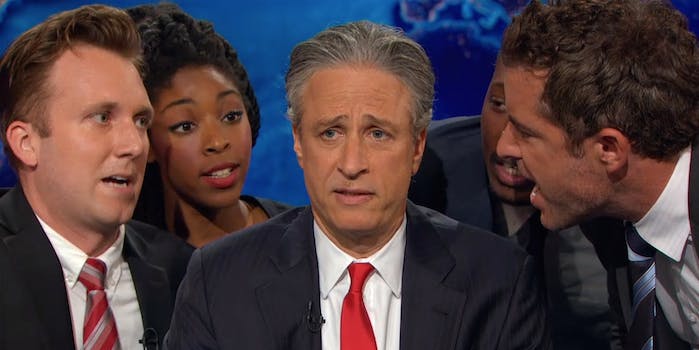 “You know what? Why don't we talk about something lighter, like… Ukraine?"

It’s hard to talk about Gaza without arguments breaking out on both sides of the issue. Just ask Jon Stewart.

The Daily Show host has been called out for being pro-Hamas with his past coverage, and on Monday night’s show he tried to address his critics. Normally, this would turn into one of his regular segments full of news clips to call out mostly everyone involved. Except this time, all he had to do was utter the word “Israel” before the talking heads (a.k.a. his news team) started spouting at him—and it quickly got ugly.

“Look, obviously there are many strong opinions on this issue,” Stewart tried to argue. “But just merely mentioning Israel or questioning in any way the effectiveness or humanity of Israel’s politics is not the same thing as being pro-Hamas.”

I don’t blame him for trying to move onto a lighter topic—like Ukraine.