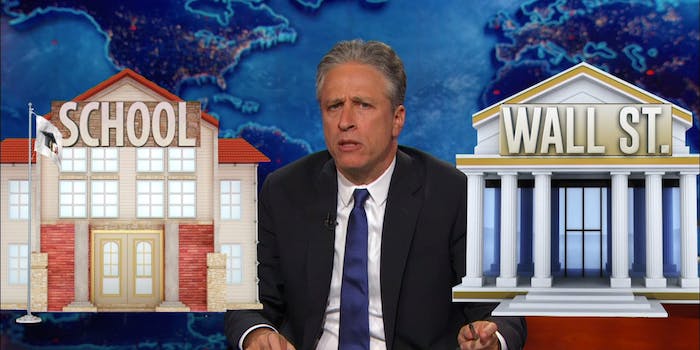 Both of these are scandals, but only one of them was really resolved.

Two fraud scandals, both alike in their lack of dignity, played out in very different ways because of who was involved. Enter Jon Stewart with the perfect Daily Show takedown.

Stewart kicked off Wednesday night’s show by discussing the cheating scandal that overtook Atlanta’s public schools, but what he really wanted to do was compare the scandal to something much bigger: the Wall Street tycoons who nearly destroyed the U.S. financial system in 2008.

Although the scandals themselves differ greatly, as Stewart pointed out, they had a lot in common the closer one looked. In both cases, people fudged official records for personal financial gain, and when other people tried to do something to stop them, the whistleblowers were intimidated into keeping their mouths shut.

The difference, Stewart said, is that the guilty people in Atlanta went to jail, while the folks on Wall Street paid out but wouldn’t admit their guilt. And the culture of greed prevails.

“Who pays $300 million and ‘doesn’t admit any wrongdoing’?” Stewart asked.

From the sound of it, that would be people who are trying to avoid jail time.