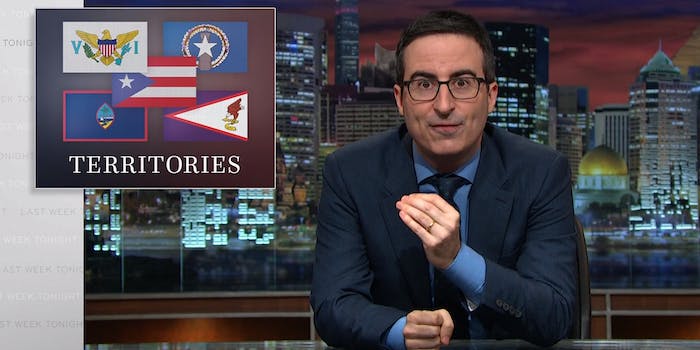 You probably didn't even realize this was happening.

At what point should we just give up and admit that John Oliver is America’s unofficial civics teacher? Last Week Tonight is more educational than some documentaries.

Sunday’s episode focused on the badly undercovered topic of U.S. territories like Guam and American Samoa, whose inhabitants can join the U.S. Army and are governed by the U.S. legal system but don’t have the same voting rights as other Americans.

As John Oliver pointed out, a lot of people don’t even understand that Puerto Rico is a U.S. territory, with multiple TV news anchors describing Supreme Court Justice Sonia Sotomayor as the child of Puerto Rican “immigrants.”

Citizens in U.S. territories cannot vote in presidential elections, a fact that stems from bigoted and archaic laws referring to the inhabitants of these territories as “alien races.” In case you’re wondering: Yes, it does indeed get worse than this.

This injustice is especially embarrassing given the recent commemoration of the Voting Rights Act. If you have to pay federal taxes and can join the U.S. Army, you should have the same voting rights as any other citizen.