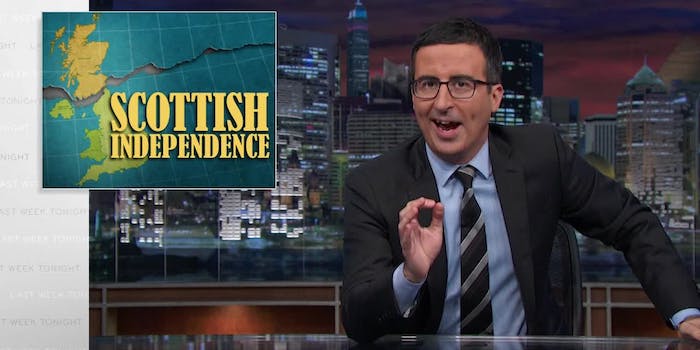 Worth watching all the way through.

With a recent poll showing that 51 percent of Scots want independence from the United Kingdom, interest in the fragility of the British Commonwealth has reached a high point. Most Americans, predictably, remain unclear on the particulars of the debate. Thankfully, John Oliver is here to help. (And so are we!)

Oliver’s explanation on last night’s episode of Last Week Tonight is as clear-cut and hilarious of a primer as any American could want.

He reviews the big money bankrolling both sides (J.K. Rowling; a couple who won the lottery), the enticements the Crown is offering to preserve the Union (mostly just the use of the pound), the dire consequences for England if Scotland leaves (they’ll need a new flag and a new home for their nukes), and the animating force behind this renewed Scottish frustration (in two words: David Cameron).

“There are legitimate reasons for Scotland to want to govern itself,” Oliver says. “For instance, it’s a predominantly liberal country which has frequently been governed by a conservative U.K. government, and seldom has that divide been more pronounced than right now, when the UK’s prime minister is David Cameron.”

Oliver then plays a TV ad from the anti-independence movement, which presented a woman speaking into the camera, saying that she understood how important the vote was and bemoaning that there were “only so many hours in the day.” Oliver ridicules this simplistic message by paraphrasing the woman:

“It’s so confusing. It hurts my wee head. I’m just a woman, you know, just a pair of ovaries and some bangs. How do I possibly have the mental capacity to pick from one of two options? Put me down for a no and never trust me with an important decision again.”

At the end of the segment, in an attempt to convince Scotland to stay, Oliver pulls out all the stops. He eats haggis. He endures loud bagpipe music. He even brings out a unicorn—Scotland’s national animal.