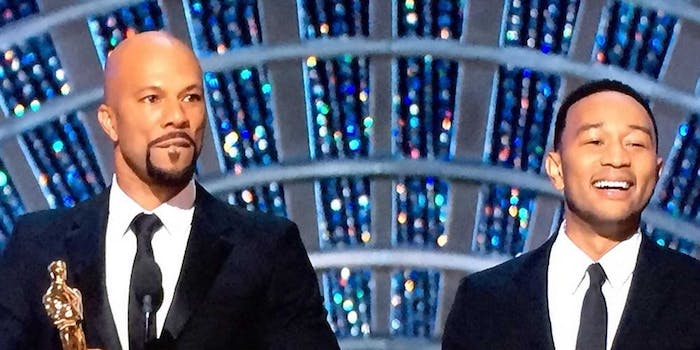 John Legend at Academy Awards: ‘The struggle for justice is right now’

"Selma is now, because the struggle for justice is right now."

In an Oscar night filled with an usual amount of politics, from the types of films featured to the speeches delivered on stage, John Legend and Common topped everyone with the most powerful acceptance speech of the night.

After winning the Academy Award for original score for the song “Glory” in the film Selma, a film that spotlights Martin Luther King, Jr., Legend and Common took to the stage and reminded the world that the struggle for justice—the very justice King fought for—is far from over.

“Nina Simone said, ‘It’s an artist’s duty to reflect the times in which we live’,” Legend said. “We wrote this song for a film that was based on events that were 50 years ago; but we say that Selma is now, because the struggle for justice is right now.”

“We know the Voting Rights Act that they fought for 50 years ago is being compromised today. We know that right now the struggle for freedom and justice is real. We live in the most incarcerated country in the world. There are more black men under correctional control today than were under slavery in 1850. When people are marching with our song, we want to tell you we are with you, we see you, we love you, march on, God bless you.”

John Legend wasn't exaggerating, for those curious about the actual numbers. pic.twitter.com/sDGwEdmBRn