Who knew Santa was a Cold War target?

As anyone who was alive for the majority of it can tell you, the Cold War was a scary time. Schoolchildren hid under their desks during nuclear drills. A minor spark anywhere in the world could lead to World War III. If the Russians were to bomb the North Pole, Santa would be killed and Christmas would be canceled. 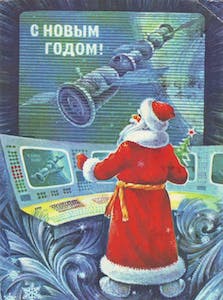 That’s right. The Russians might have bombed Santa, Rudolph, and all their toys into oblivion like a bunch of Communist grinches.

This was the private fear of one little girl named Michelle, who wrote a letter to President John F. Kennedy on Oct. 28, 1961, that raised the possibility of a nuclear annihilation of Christmas. That year, the Soviet Union conducted 57 atmospheric nuclear tests. The most powerful test yielded an explosion equivalent to 50 megatons of TNT, more than three times as much explosive power as the atomic bomb that the U.S. dropped on Hiroshima in 1945. Michelle was understandably concerned that Santa’s workshop might be the next site devastated by nuclear weapons.

“I was glad to get your letter about trying to stop the Russians from bombing the North Pole and risking the life of Santa Claus,” Kennedy wrote, in what was surely the strangest communique he dispatched that day.

We don’t know whether Kennedy’s message reassured Michelle, but as Christmas Eve approaches, his words are worth taking to heart. Stay safe out there, Santa.

Photo via larsjuh/Flickr (CC BY 2.0) | Remix by Jason Reed