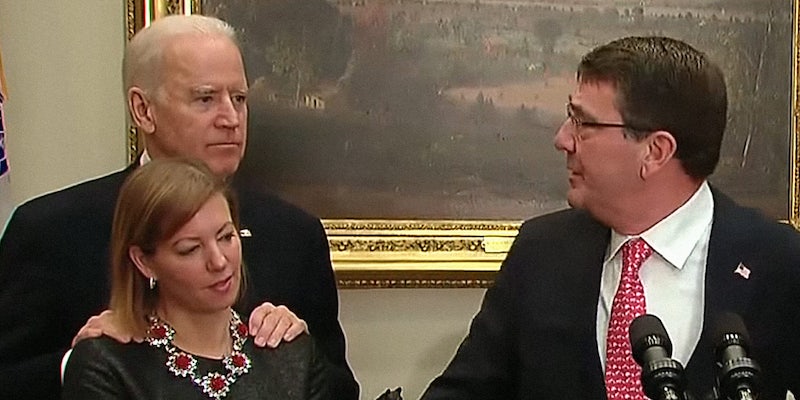 The internet never forgets—and that's a problem for Joe Biden.

Joe Biden, former vice president of the United States, recently rocketed to the top of the list of people who could successfully beat President Donald Trump in the 2020 election—and for good reason.

A recent Politico/Morning Consult poll found that voters would pick Biden over Trump in a hypothetical 2020 matchup 46 to 35. Sure, that’s a slightly lower margin of victory than a previous poll that put Trump up against a generic Democrat (that one was 48 to 34 percent). But an 11-point lead is still impressive.

Biden is doing his part to keep alive the dream of running. Speaking with the Today Show earlier this month, for example, Biden said he isn’t “closing the door” on challenging Trump but that he hasn’t yet decided.

Privately, Politico reports, Biden has expressed his belief that he is the only Democrat who could successfully take on Trump.

That may be true. But before Democrats crown Biden the Great Blue Savior, they need to reckon with an uncomfortable truth: Biden has treated women in bizarre, creepy, and possibly inappropriate ways.

In this “post-Weinstein” moment of #MeToo testimonials, each day bring us new revelations about men sexually harassing, assaulting, victimizing, degrading, and raping women. The damning tales reached another 2020 prospect, Sen. Al Franken (D-Minn.), on Thursday after Los Angeles radio news anchor Leeann Tweeden said the former comedian in 2006 forcefully kissed her and posed for a photo where he touched her breasts as she slept. Franken responded by apologizing and agreeing to cooperate in an ethics investigation into himself.

When it comes to Biden treating women in ways that certainly appear inappropriate, though, we don’t need anyone to speak to reporters or pen a tell-all blog post. All we have to do is look at the footage out there in the public domain.

Here is Biden at the 2015 swearing-in ceremony of former Defense Secretary Ash Carter, placing his hands on the shoulders of Carter’s wife, Stephanie.

Or, perhaps people might point to this GIF of Biden attempting to kiss the visibly uncomfortable daughter of Sen. Chris Coons (D-Del.)

Those two GIFs are likely enough for Biden’s critics to send him into crisis mode. But it doesn’t stop there: Conservatives have long pointed out Biden’s action with women and girls, resulting in a slew of compilation videos on YouTube that further cement Biden’s reputation.

We have Biden at his own swearing-in ceremony, saying a bunch of sexually charged things to various teenage girls, such as commenting on their looks or warning them not to date.

And here’s a compilation of Biden being strangely hands-on.

You get the point.

To be entirely clear: None of this is to say Biden has ever sexually assaulted anyone, but these videos could easily be considered sexual harassment. There’s no doubt that these moments will be used by any potential political opponents to discredit any progressive bonafides the former vice president might aim to espouse, and it’s not fair to dismiss that argument without merit.

On top of this is the substantial criticism that Biden is the person responsible for helping silence law professor Anita Hill. It was her public testimony in 1991 against her former employer Clarence Thomas, then a nominee to the U.S. Supreme Court, that brought the issue of sexual assault in the workplace out of the shadows and into the American consciousness. As HuffPost points out, Biden, a long-time senator, served as chairman of the Senate Judiciary Committee in 1991 and could have called on other women to testify in support of Hill’s claims as the Senate considered Thomas’ nomination, but he chose not to. He has since tried to own up to his role in stifling Hill and allowing Thomas to rise to the highest court in the land—but in a moment when past transgressions feel immediate and real, that’s likely not enough.

As vice president, Biden did champion additional sexual assault protections for women on campuses. And just this week, Biden and Lady Gaga announced their plan to open trauma centers for women who experience physical and emotional abuse.

“Women who are abused end up having long-term physical and physiological problems,” Biden told the crowd at Glamour‘s Women of the Year Summit in New York City on Monday, according to Entertainment Weekly. He added, “We finally are recognizing the long-term impacts on the health of women and men who’ve been abused. It’s the next great frontier I want to be part of.”

In the end, if Biden runs in this post-Weinstein era, he will have a strong record to run on, but there is no doubt he will also have to contend with his past.