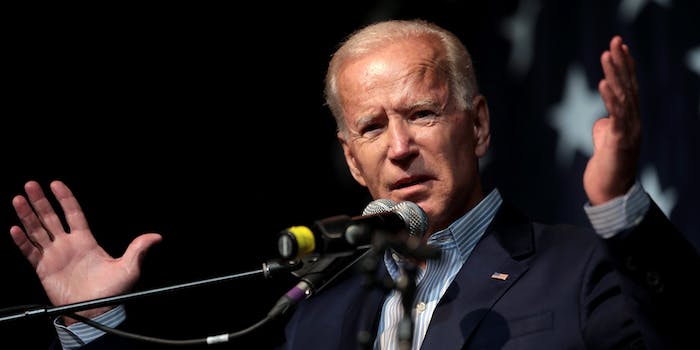 That's quite a message from the current front runner campaign.

Dr. Jill Biden, the wife of current 2020 Democratic front-runner Joe Biden, told a group in New Hampshire that despite any of their preferences for other 2020 hopefuls, they should “swallow a little bit” and vote for the former vice president.

Her argument, it appears, is that voters who care about a number of issues should put them aside (despite it being early in the primary) and set their sights squarely on a candidate who can beat President Donald Trump in the next presidential election.

“I know that not all of you are committed to my husband, and I respect that,” she said. “You’re candidate might be better on–I don’t know, healthcare–than Joe is, but you’ve got to look at who is going to win this election. And maybe you have to swallow a little bit and say ‘OK I could personally like so-and-so better’ but your bottom line has to be that we have to beat Trump.”

“I want you to think about your candidate, his or her electability and who’s going to win this race. And so if you’re looking at that you’ve got to look at the polls, and you know a lot of the times, I say ‘oh you know polls don’t mean anything, polls don’t mean anything,’ but if they’re consistent and they’re consistently saying the same thing, I think you can’t dismiss that. I mean you all deal with facts.”

Dr. Jill Biden: “Your candidate might be better on … [the issues] than Joe is, but you’ve got to look at who’s going to win the election. And maybe you have to swallow a little bit…but your bottom line has to be that we have to beat Trump.”

Biden continued to say that her husband—despite it being early in the nomination process and the former vice president continuously stepping on his toes—has the best shot at defeating Trump by getting independent voters and Republicans to vote against him.

While such a mantra might be more palatable during the run-up to a 2020 showdown with Trump, a campaign surrogate of the current front runner telling members of your own party to suck it up and vote for someone who isn’t your favorite so early in the primary feels a bit desperate.