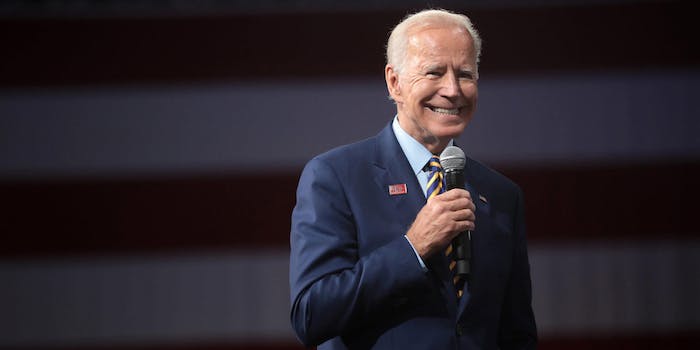 The remark drew some attention from people online.

2020 Democratic presidential hopeful Joe Biden defended criticism about a story he’s told about a soldier in Afghanistan that refused to receive a medal, telling a news outlet that “the details are irrelevant in terms of decision-making.”

Last week the Washington Post reported that a story Biden told on the campaign trail about a soldier who tried to save a fellow soldier in Afghanistan and told Biden that he didn’t want a Silver Star pinned on him.

However, as the Post reported, Biden appeared to be taking bits and pieces of stories from at least three different events.

Biden, who has made several flubs along the campaign trail so far in his 2020 race, made the remarks in an interview with NPR.

Biden tells NPR re: his gaffes: “Details are irrelevant in terms of decision making” https://t.co/aiQ2RTmVY4

“The whole purpose of what I was saying did not in any way effect my point. There are incredibly brave, decent, honorable, men and women in the military who in fact are like any other generation–only even have done more. They’ve saddled up, they’ve gone out, they’ve wiped the blood off of these Humvees, they’ve gone back out, they get out again, they go out again and again and again.”

“The fact that I would forget that it was Rodriguez who was pinning–I believe this is the case– pinning a bronze star on a young man was, it’s irrelevant to the point,” he said. “It’s like saying, ‘I had this very bright reporter, and I think her eyes were blue.’ What difference would it make about whether you were a bright reporter? Your eyes are brown. It’s irrelevant, and you know it.”

On Monday, Biden also insisted that he was not trying to “mislead” anybody with the story, according to CNN.

Some people had serious concerns with Biden’s remarks.

Ah the cursed "details", that famously unnecessary part of the decision making process that we all hate https://t.co/ep7CDQgOMt

Reminder that this dude is still the frontrunner for reasons I barely fathom. https://t.co/QwU9mfXqfw

Warren should bookmark this statement for the next debate. https://t.co/BIyKXwPPt1

While others saw an opportunity to make a joke about it.

You love to see it https://t.co/4KeZzxlTZY

A campaign slogan for the ages. https://t.co/U6Tb5GVV5o

You can read more about Biden’s remarks via NPR.