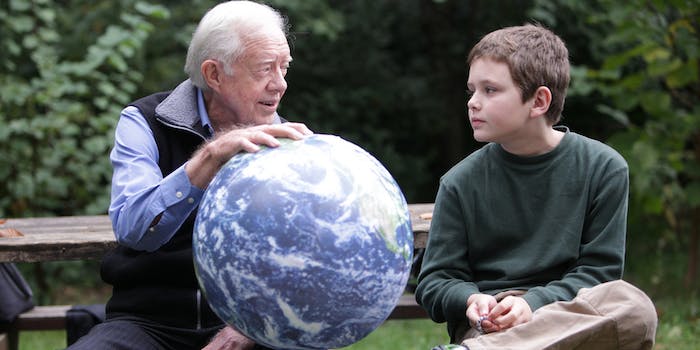 Jimmy Carter used the Internet to campaign back in 1976

"'Peanut One,' Jimmy Carter’s campaign jet, is the first such candidate aircraft to be equipped with two computers."

The Internet has transformed presidential elections in the 21st century. As the Atlantic reported, in 2000, John McCain became the first major candidate to harness online fundraising. In 2004, Howard Dean waged a grassroots campaign from the blogosphere. And of course, in 2008, Barack Obama won victory by harnessing not only the Internet’s fundraising potential but its meme culture as well (recall Obama Girl’s “Crush on Obama”).

So to whom does the crown of First Internet Candidate go? On that list above, Obama is the only member who actually won office. But even by that metric, the Atlantic pointed out, the honor rightfully belongs to #39, Jimmy Carter, for his 1976 “computer-driven” campaign.

That’s right. Fifteen years before the World Wide Web was even invented, Jimmy Carter was harnessing the power of the Internet to secure the White House. According to Wizards Stay Up Late: The Origins Of The Internet by Katie Hafner and Matthew Lyon, as the government was beginning to embrace email, Carter already incorporating it into his daily routine: “Jimmy Carter’s presidential campaign used e-mail several times a day in the autumn of 1976. [For] a political campaign this was a revolutionary stroke in communications,” the authors wrote. “On that basis, Carter was labeled the ‘computer-driven candidate.”

Indeed, as the Washington Post reported back in 1976, “‘Peanut One,’ Jimmy Carter’s campaign jet, is the first such candidate aircraft to be equipped with two computers. The one in the back, a wicked purring creature, is hooked in by elaborate circuitry to the schedule, media, and organization staff.”

According to the Post, Carter’s computers produced “endless sheets of high speed data all properly coded” (whatever that meant in 1976).

Really, it’s not so surprising. Way back in June, when former intelligence contractor Edward Snowden’s leaks about U.S. National Security Agency Internet spying were first coming to light, Carter spoke out in favor of the fugitive whistleblower: “He’s obviously violated the laws of America, for which he’s responsible,” Carter said of Snowden. “If the United States can acquire custody of him, I’m sure he will be brought to trial, and that’s the way the law should be implemented.” But, Carter said, “I think that the bringing of it to the public notice has probably been, in the long term, beneficial.”

If nothing else, the 1976 “computer-driven candidate” is adept at seeing in the long term.