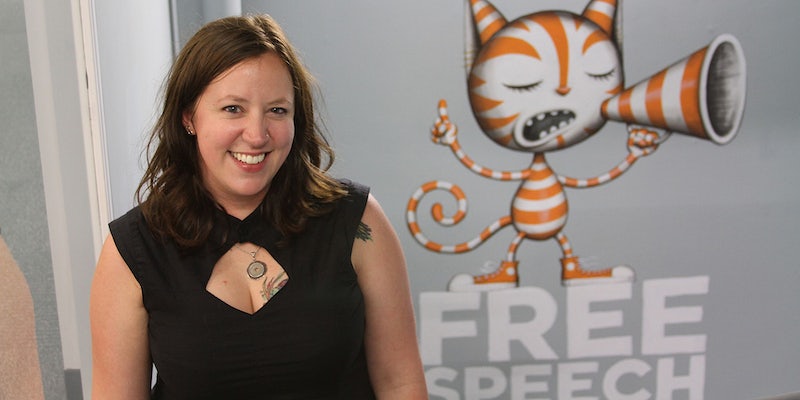 What scares one of the world's most prominent Internet-freedom advocates? Not what you think.

Jillian York’s not stingy. As much as you might agree with her, she’s always thoughtful enough to throw you a curveball of an idea, something you can really get a purchase on and shake by the neck a bit. Something you might think is utterly wrong. The only problem in arguing with her is that she’s always informed and frequently reasonable.

York is the Director of International Freedom of Speech (the kind of title that makes certain of us want to draw hearts on our homework) at the Electronic Frontier Foundation (EFF), the premiere online-rights organization.

Her list of credits prior to, and concurrent with, her EFF work is too extensive to list outside of a CV, but they include contributing analysis and op-eds to the New York Times, Al Jazeera, the Atlantic, the Guardian, Al Akhbar English, Slate, Foreign Policy, and Die Zeit; serving as a fellow at the Center for Internet & Human Rights at the European University; and serving on the Board of Directors of Global Voices Online, where she worked before EFF.

York lives in Berlin and spoke to The Daily Dot via email. These are her personal views and not meant to represent those of her employers, co-workers, or pets.

What threat to our privacy or expression is going on now that most people aren’t aware of?

Jillian York: For me, the continuing threat is from corporations, on both counts. We’ve made some progress with respect to privacy and government, but corporations are still capturing all of our data. Why do we trust them not to do something nefarious with it?

“My position comes from a deep belief that these are issues that should be dealt with by communities, not authorities.”

When it comes to speech, corporate online spaces are the new public square, deciding for us what speech is acceptable and what isn’t. The implications for this go beyond censorship: I believe that companies are shifting norms around acceptable speech, particularly when it comes to things like nudity, LGBTQ rights, and other issues on the “margins.”

I think that in the fight against the NSA, we’ve missed a lot of the other surveillance that’s happening. Don’t get me wrong, the NSA’s mass surveillance of the world’s citizens is horrible and deserves the attention it’s gotten, but if we focus too narrowly on it, we miss what local police are doing to minorities, what the FBI is doing to Muslims, and so forth. All in all, the biggest threat to me is surveillance, in the broader sense.

When we look back at this time in the future, what do you think we’re going to see more clearly that we can’t see now?

I think we’re going to look back and see how naive we were with respect to the role of corporations. Honestly, I’m not immune to it—I still use Facebook despite all of my misgivings; I still check my Gmail account, and I still tweet regularly.

You seem to have a devotion to free speech that is much less qualified than most. What powers it? Why is free speech more important to you than, say, people’s religious or other sensibilities?

It’s funny—I’ve done a lot of reading and thinking lately on harassment and censorship, and while I still think corporations are incredibly poor arbiters of speech, I can feel my views shifting; the argument that harassment is censorious of women (and others) really resonates on a personal level. But at the same time, we are ultimately asking authorities (be they governments or companies) to erase speech, and not only does my anti-authoritarian nature bristle at that, but I also feel as though censorship, in most cases, is sticking a bandage on a larger societal ill.

My position comes from a deep belief that these are issues that should be dealt with by communities, not authorities.

I’d also like to say that I’m open to my views being challenged, and I think they have been, by some really smart people, over the years. As much as my more libertarian comrades in this space will disagree, I have come to believe that there are problems with the “slippery slope” argument when it goes unexamined: In the slippery slope argument, I think a lot of the focus from American advocates right now is on speech that’s on the right side of the Overton Window, to the neglect of speech on the left side of it.

I see a defense for the Pamela Gellers of the world being prioritized because they’re provocative, when many of those being silenced are even less supported, more on the margins. That doesn’t mean we don’t defend everyone’s right from interference by the state; it means we look beyond where the media’s attention is in a given week to find those cases that aren’t getting constant airplay, and I’ll tell you: Most of those cases are on the left.

You have contended that private companies have a responsibility for not just not assisting governments in spying on us, but in preserving free speech, or at least not interfering with ours. Others might say that private companies are different than governments. A possible worry is that confusing the right (as deriving from, say, the Constitution) to speak without being imprisoned and the “right” for Facebook to let a user talk about the “Jewish conspiracy” can muddy up the issue. Can you speak to how you believe companies do have a responsibility to preserve free speech?

I think there’s a threshold. I made this argument once at a conference, and got asked if that meant J-Date (the Jewish dating site) should accept people who are not Jewish. No, that’s not my argument.

My argument focuses on those companies that a) are actively seeking to become the world’s commons; and b) have stated a belief in free speech. That encompasses Facebook, it encompasses Twitter and Google, and I’m sure there are others. You cannot simultaneously say that you’re a platform for the free exchange of ideas then take down an image of classical art because it has a nude body in it.

“I can remember being angry as a kid about the school library (and friends’ parents!) telling me a book was too “adult” for me to read.”

On the other hand, if you’re a small platform that has explicitly stated that you are a place for Jewish couples to meet, or a place for trans people to talk in a safe space, then you’re exempt from that argument.

But to the broader point, it’s worth mentioning that I didn’t come to the free speech fight from a Constitutionalist perspective. I came to it while living in a country where no speech rights are a given; and therefore, I think about it on principle, rather than from a legal perspective. Yes, that muddies the waters at times, but I think we should be just as worried about corporations governing what we can say as we have been about governments, and in the past (and sometimes the present), religious institutions.

Can you tell me how you came to be so devoted to speech issues? Did it start early for you? Was there an event or was it a function of your innate personality?

Well, okay, I suppose it started earlier than when I was living abroad. I can remember being angry as a kid about the school library (and friends’ parents!) telling me a book was too “adult” for me to read, despite the fact that my parents had allowed me to choose the book myself (it was Stephen King, for the record). But I came to work on this after my first week living in Morocco and coming across online censorship for the first time.

Can you give me a picture of a worst-possible scenario for our world when it comes to speech, surveillance, and the digital world five years from now, given what’s currently going on?

Never ask a pessimist that question! I suppose I should give a positive answer, and I can: I think that in five years, the world will be much more aware of these issues. Optimistically, I also hope that this will become part of our (at an individual level) broader politics; right now, the fight against surveillance and censorship—perhaps because it’s a fight that crosses political boundaries—is often divorced from other politics, and that worries me. I would like to see us view this from a broader political lens and act accordingly.

What about the best possible situation we could arrive at in that time if things go well?

An end to mass surveillance, of everyone, everywhere.

Aside from all these earthshakingly important things, what do you like online? In other words, are there games you play, artists you follow—what are the sheer fun things you follow or engage in online?

Sheer fun? What’s that? Nah, I’m kidding. I play the doge version of 2048. I watch funny videos: “Getting Doug with High” is my favorite series at the moment. I talk a lot with friends around the world; that’s what keeps me going on a personal level.  And I read a ton—right now, I’m trying to read things far outside of my realm of work/expertise: I’ve been reading about prison abolition, the problems with drug rehab in this country, and, on a lighter note, the different animals that occur when you breed zebras with horses or donkeys (that’d be a zorse and a zonkey, respectively).

“I think we should be just as worried about corporations governing what we can say as we have been about governments.”

You live in Berlin now. What occasioned your move?

Everyone thinks I moved to Berlin as an “exile,” and let me set the record straight: As frustrated as I am with the United States, I moved to Berlin because I was really sick of constant 12-hour flights (for work), and because I was unhappy (and poor) in San Francisco. Berlin was a good choice for countless reasons, and I really love it there.

What is your newest project? What’s on the horizon for you?

Okay, there are two that I’m excited about: One is Digital Citizen, a collective biweekly, trilingual newsletter on digital-rights issues in the Arab world. About 20 people from 10 or so countries put it together every two weeks, and mostly without any dedicated funding. It’s an exercise in amazing collaboration.

The other has yet to launch, but is a project I cofounded with my friend Ramzi Jaber (of Visualizing Palestine) and for which we won the Knight News Challenge last year. In short, it seeks to understand how companies regulate speech: what types of content they’re taking down, and where. We’re set to launch in early fall. Keep your eyes on EFF for an announcement.

Photo via Dave Maass (CC BY)