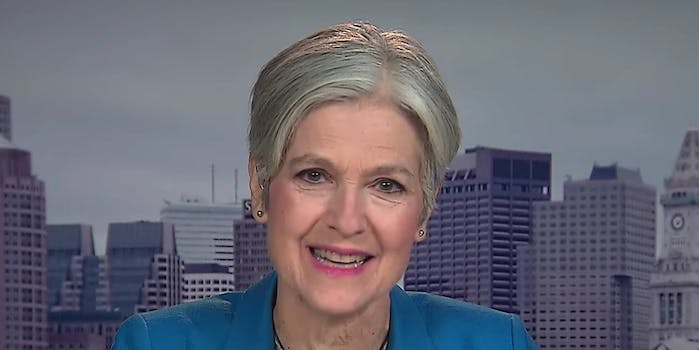 After weeks of publicity and expectation, it sounds as if the recount effort in the state of Pennsylvania might be falling by the wayside. At least through the means that the Green Party was initially pursuing.

As multiple outlets have reported, attorneys representing the party and its presidential candidate Jill Stein dropped their Pennsylvania recount court challenge on Saturday, just two days ahead of when the court would’ve required the petitioners to pay a $1 million bond.

Stein released a statement afterward, blasting the Pennsylvania courts as placing an “outrageous” demand on the voters of the state and condemning what she called its “antiquated” election laws.

“The judge’s outrageous demand that voters pay such an exorbitant figure is a shameful, unacceptable barrier to democratic participation. This is yet another sign that Pennsylvania’s antiquated election law is stacked against voters. By demanding a $1 million bond from voters yesterday, the court made clear it has no interest in giving a fair hearing to these voters’ legitimate concerns over the accuracy, security and fairness of an election tainted by suspicion.”

In practical terms, no recount in Pennsylvania would mean there’s no teeth, even theoretically, behind similar efforts the Green Party has mounted in two other pivotal swing states, Wisconsin and Michigan. That’s because Donald Trump won the electoral college by 36 votes, and with Pennsylvania accounting for 20, he’ll remain the victor unless all three states ended up going to Clinton.

That’s basically been a pipe dream from the very start, however. Trump currently leads in the Keystone State by more than 40,000 votes (although his winning margin has shrunk as more votes have been tabulated), while recounts historically swing no more than hundreds of votes. In simple terms, there was never much of a chance for these efforts to produce any benefit, besides normalizing the notion of post-election vote audits. Absent some manner of comprehensive Pennsylvania recount, however, even those long-shot odds are dead in the water.

However, Stein indicated Sunday that she’s planning a counter-move, an attempt to circumvent the Pennsylvania court system. After news broke of the Green Party dropping the Pennsylvania challenge, she announced a new strategy: taking it to the federal courts, rather than staying at the state level.

To be specific, she’ll reportedly be seeking a full recount of the state’s results in a federal lawsuit, on constitutional grounds. That challenge is slated to begin Monday, the same day Stein says she’ll make a statement in New York City’s Trump Tower. For her part, Stein has characterized this as “escalating” the recount efforts, rather than dropping or halting them.

Stein, for the record, has admitted that no evidence of voter fraud or election fraud has yet been discovered, and the former, at least, is no surprise—voter fraud is fleetingly rare, which is precisely why GOP-led efforts to restrict the vote in states like North Carolina have been decried as politically motivated disenfranchisement, particularly of low-income and black voters.