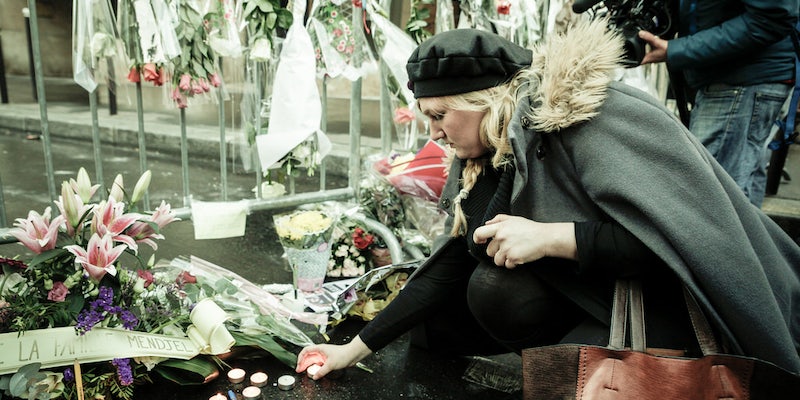 #JeSuisCharlie is now one of the most popular hashtags ever

Users worldwide have been tweeting it in solidarity with survivors of the Charlie Hebdo magazine massacre.

The massacre on Wednesday at the Paris headquarters of satire magazine Charlie Hebdo has left people all over the world reeling, and many have turned to Twitter using the hashtag #JeSuisCharlie to express their grief and solidarity with the survivors. So many people, in fact, that it’s become one of the most popular news hashtags in Twitter’s history.

For all you people out there who don’t speak French, “Je Suis Charlie” translates to “I Am Charlie,” the phrase that has come to symbolize solidarity with the victims of the attack.

On Friday afternoon, a little more than two days after the carnage occurred at Charlie Hebdo‘s Paris headquarters and the day that another deadly attack occurred in a Parisian kosher supermarket, #JeSuisCharlie had been tweeted nearly 3.5 million times.

#JeSuisCharlie has now become one of @twitter's most popular hashtags https://t.co/1lP6xc0Hgb pic.twitter.com/AXxT4eFknA

The hashtag peaked on Thursday evening, with 6,500 tweets per minute, according to CNN Money. They also report that Twitter is crunching the exact numbers to see where this hashtag falls on the all-time news hashtag leaderboard.

Two other widely popular hashtags have been born out of the success of #JeSuisCharlie. #JeSuisAhmed honors one of the police officers killed on Wednesday, a french Muslim named Ahmed Merabet, and #JeSuisKouachi, which is meant to support the French brothers,  who carried out Wednesday’s attack and were killed in a police standoff Friday morning.