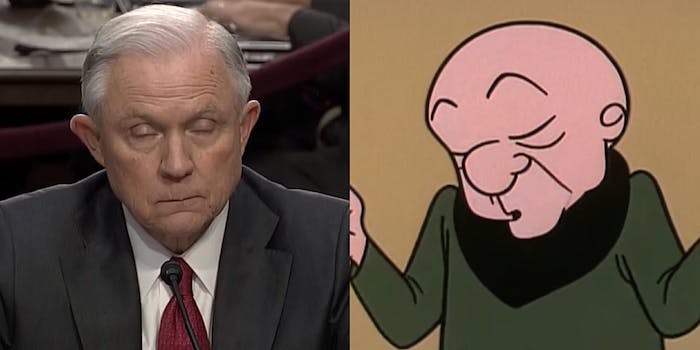 President Donald Trump, who has has a long history of publicly insulting Attorney General Jeff Sessions, apparently also makes fun of the head of his Justice Department in private, too.

According to a new Washington Post report, Trump calls him “Mr. Magoo.”

Behind the scenes, Trump has derisively referred to Sessions as “Mr. Magoo,” a cartoon character who is elderly, myopic and bumbling, according to people with whom he has spoken.

The nickname is a snippet in a longer piece about how Special Counsel Robert Mueller is probing Trump’s attempts to get Sessions to resign last summer, but that’s not important. What is is this example of how out-of-touch the 71-year-old president is.

Not only is Mr. Magoo a cartoon character invented in the 1940s and eons removed from national relevance, the accepted and preferred nickname for Sessions is the Keebler Elf.

It’s just another example of Trump bucking established norms and enraging the left.

How is Mr. Magoo Trump's Sessions nickname when he's a dead ringer for the Keebler Elf?

It's like his nicknamer is broken, and he'll need it in prison! pic.twitter.com/s9ZXBVhixu

It's been well established that Sessions is the Keebler Elf. pic.twitter.com/tHyML9OdII

The Post reports the attempts to fire Sessions could be another way in which the president is charged with obstruction of justice in the special counsel’s investigation into possible collusion with the Russian government.