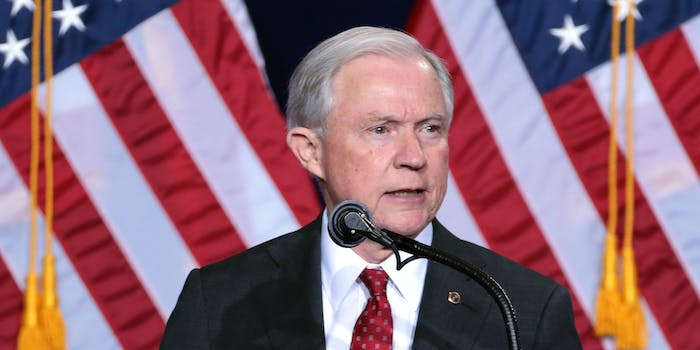 A new report calls into question claims about the nature of Jeff Sessions' conversations with Russia's ambassador.

New details have emerged that further complicate explanations about the propriety of Attorney General Jeff Sessions‘ meetings with Russia’s ambassador to the United States.

The Wall Street Journal, citing “a person at the event and campaign-finance records,” reports that Sessions met with Russian Ambassador Sergey Kislyak during a trip to the Republican National Convention that he paid for with his political campaign funds. He also discussed President Donald Trump‘s campaign at an RNC event. The report casts doubt on assertions by Sessions and the White House that the then-Alabama lawmaker was acting as a U.S. senator, not a Trump campaign surrogate, during the meeting.

Sessions is under fire for falsely stating during his confirmation hearings that he had no contact with Russian officials during the 2016 election campaign. Sessions, who on Thursday recused himself from any investigations into the Trump campaign, served as chairman of the campaign’s National Security Advisory Committee for four months before the July meeting with Kislyak.

During a confirmation hearing on Jan. 10, Sen. Al Franken (D-Minn.) asked Sessions, “If there is any evidence that anyone affiliated with the Trump campaign communicated with the Russian government in the course of this campaign, what will you do?”

“Sen. Franken, I am not aware of any of those activities,” Sessions responded. “I have been called a surrogate at a time or two in that campaign and I did not have communications with the Russians, and I’m unable to comment on it.”

Following reports that Sessions did, in fact, “have communications with the Russians” on two occasions, Sessions asserted that he met with Kislyak as part of his role as a senator and member of the Senate Armed Services Committee, not as a Trump surrogate. White House Press Secretary Sean Spicer repeated this assertion to refute claims that Sessions committed perjury.

“He was literally conducting himself as a United States senator,” Spicer said on Thursday. He added, “This is what senators do in the course of conducting themselves in their jobs.”

Were Sessions acting primarily in his role as a U.S. senator during the RNC trip, he would not have paid for it with campaign funds, experts say.

During a press conference on Thursday, Sessions repeatedly said he “did not recall” exactly what was discussed during his meetings with Kislyak.