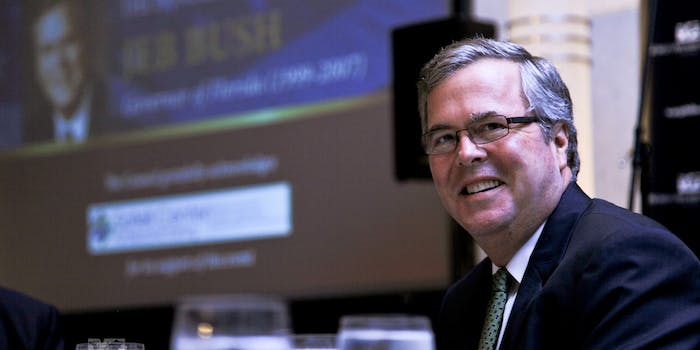 Can you spot the Photoshop fail in Jeb Bush’s Super PAC mailer?

Right to Rise, the Super PAC supporting Jeb Bush, has raised more than $100 million to finance his campaign. But although Right to Rise might excel at fundraising, it’s not so great at Photoshop.

Yesterday, the Super PAC announced on Twitter that it was sending out a promotional mailer to 86,000 households in Iowa—a mailer that shows Bush with one white hand and one black hand.

In the image, Bush appears in front of a bridge in Cedar Rapids, Iowa. His left hand appears to belong to a black man, and his right hand seems to have been pasted over someone else’s hand, too.

The Photoshop blunder might be attributable to Federal Election Commission rules, Time explains. Super PACs aren’t allowed to coordinate with candidates, so Right to Rise could not ask Bush to pose for a photo in front of the Cedar Rapids bridge. Instead, it had to create one.

Time tracked down the stock art image of the bridge used by Right to Rise, but there are no people in the photo. So the question remains—whose hand does Bush have?