Photo by Christopher Michel/Flickr (CC BY 2.0)

And it's not America.

Saying goodbye to 2014 and welcoming in a new year can be exhausting. And while some people may stay celebrate until the sun comes up, others are in bed moments after the ball drops.

To see how different countries ring in the new year, and just how late the parties go, Jawbone analyzed sleep data from hundreds of thousands of Jawbone users and discovered that the U.S. is pretty lame when it comes to New Year’s Eve celebrations. 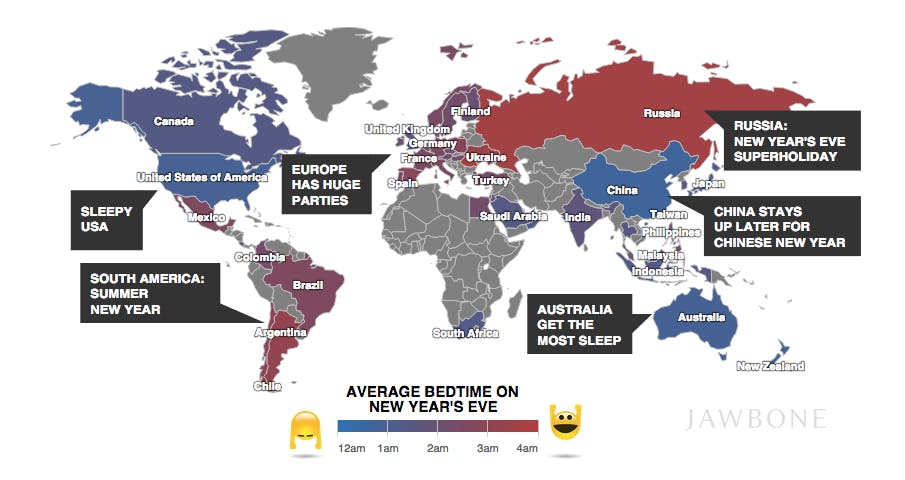 The wearable company used information collected from Jawbone UP users—the fitness tracker monitors exercise and sleep data to help people better understand their activity throughout the day. Jawbone data scientists anonymized and analyzed the information provided by wearers and figured out which countries around the world put off sleep for celebration.

So what country stays up the latest? Russia clocked in an average bedtime of 3:36am, with over 90 percent of the Jawbone wearers awake past midnight. Russia combines the Christmas and New Year’s holidays because Christmas was removed from the calendar during the Soviet era—now New Year’s is called a “super holiday” in Russia, with adults celebrating long into the night and children waking up early the next morning to open presents delivered by Father Frost. Christmas was reinstated and the country still celebrates it on Dec. 25, but Novy God remains the biggest celebration.

Jawbone found that Europe and South America have massive parties, and countries including Germany, the Netherlands, Brazil, and Chile all stay up way past 2am, while Argentina parties past 3am.

Even the U.S.’s neighbors to the north go harder than America—on average, Canadians go to bed at 1:22am, while those of us in the States barely make it past midnight and turn in at 12:55am. The exception is New York City, where revelers tend to stay up until around 2am.

While it’s interesting to see how late different countries stay up on New Year’s, Jawbone’s analysis also serves as a reminder of just how much data people are giving up for the convenience of monitoring our bodies and homes through connected devices. Earlier this year the wearable-maker caught some flack for demonstrating how earthquakes can disrupt sleep patterns after it released a graph displaying users’ reactions to the Napa Earthquake.

So either you find this sort of unwilling experiment strange or your motivated to stay up a little later this year, proving that you totally can party as hard as Russia.

Photo by Christopher Michel/Flickr (CC BY 2.0)