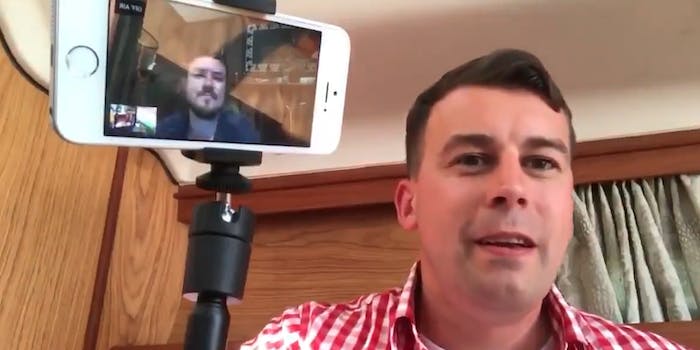 'I want this to stop in my room, Jason.'

Prominent white supremacist Jason Kessler, whose Unite the Right rally in Washington, D.C., only turned out a mere 20 supporters this month, was humiliated again Tuesday after footage surfaced of his angry father interrupting his livestream.

Kessler can be seen discussing Orthodox Jews in the clip, before the sudden argument erupts, much to the shock of fellow white nationalist and former U.S. Senate candidate Patrick Little.

Little had originally posted the video on June 28 but one Twitter user spliced the specific clip of the altercation and uploaded it to Twitter on Tuesday where it quickly went viral.

Unite the Right 2 organizer, Nazi failure Jason Kessler gets yelled at by his dad for being a Nazi while livestreaming w Nazi loser Patrick Little, who admits he may have to sell the boat he's broadcasting from at a loss because he needs money. pic.twitter.com/skmlmtdSAE

“Hey!” Kessler’s father shouts in the background, cutting in on the conversation. “You get out of my room!”

Little laughs awkwardly, asking if the angry voice belongs to a “drunk roommate.”

“Something like that,” Kessler replies, trying to avoid giving the answer and disappearing from view.

“I want this to stop in my room, Jason,” the father can be heard continuing. “This is my room.”

Upset and embarrassed, Kessler blasts his “cucked” parents whom he says watch “constant anti-German propaganda” on the History Channel.

“I’m stuck in a situation where I have to stay with my family because I’m paying for all these lawsuits and I can’t afford to do that without staying with my family,” he explains.

The lawsuits that Kessler references are related to last year’s violent Unite the Right rally in Charlottesville, Virginia, where protester Heather Heyer was murdered by a self-described Nazi who drove his car through a crowd. Kessler was one of the main organizers of that event and of this year’s follow-up march, Unite the Right 2, which happened in Washington, D.C., last month.

Although Kessler applied for a permit for 400 marchers, around 20 neo-Nazis showed up in contrast to the hundreds of counter-demonstrators who organized.