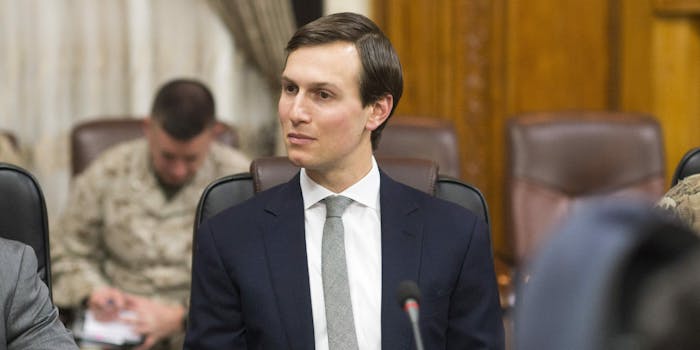 In December, Jared Kushner asked Russian Ambassador Sergey Kislyak about using Russian diplomatic facilities to establish a secret and secure communications line between the Trump transition team and the Kremlin, the Washington Post reported in an explosive new story Friday.

According to U.S. officials who intercepted and reviewed Russian communications regarding the proposal, Kislyak told his superiors that Kushner, Trump’s son-in-law and senior adviser, suggested the communications line during a meeting at Trump Tower on Dec. 1 or 2.

While the Post was notified of the incident via an anonymous letter in December and the White House disclosed and downplayed the meeting in March, U.S. officials have verified that talks of the secret channel are consistent with their understanding of events.

Setting up such a private channel between a foreign leader and a transition team would be unusual, according to the Post, though the State Department, the White House National Security Council, and the U.S. intelligence agencies all have that ability. Obama administration officials say Trump transition team members never approached them about arranging a secure channel, possibly because of leak concerns.

Kislyak was reportedly taken aback at the question of allowing an American to use Russian communications gear at their embassy or consulate. The Post indicates that such usage would have been a security issue and would require Moscow to expose its sophisticated communications capabilities.

The request appeared “extremely naive or absolutely crazy,” to one former senior intelligence official who spoke to the Post. The FBI closely monitors communications of Russian officials in the U.S., and it consistently surveils Russia’s diplomatic facilities. A Trump transition official coming and going to the embassy would have been extremely concerning. Additionally, the official asked how Kushner would be sure the Russians wouldn’t leak the communications themselves.

On Friday, the Democratic National Committee (DNC) called for Trump to fire Kushner after the Post‘s report on the secure communication channel proposal, according to the Hill.

“Trump has no choice but to immediately fire Kushner, whose failure to report this episode on his security clearance is reason enough for a criminal investigation,” DNC deputy communications director Adrienne Watson said in a statement. “The next question is whether the president authorized this, because no one stands between Trump and Kushner on the chain of command.”