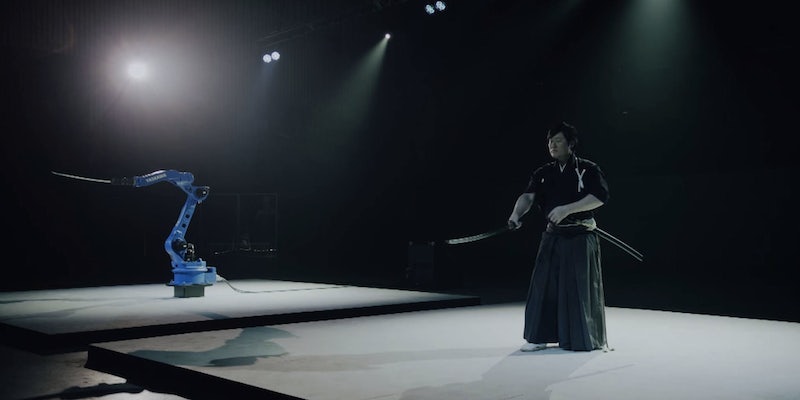 Its uppercut is impressive.

Usually a sword-wielding robot would be the stuff of nightmares. But the Japanese company Yaskawa Electric Corporation makes it look totally awesome.

The company taught one of its manufacturing robots to replicate the moves of Isao Machii, a world-renowned Iaijutsu martial artist. (Iaijutsu is a martial art that uses the katana sword in combative techniques.)

In what the company calls the Yaskawa Bushido Project, Machii went through a number of traditional Iaijutsu challenges as a sensor-studded suit tracked his movements. The MH24 Motoman manufacturing robot monitored and copied every bit of his posture, form, and gesturing, from his arm and sword placement to his head and leg position..

Yaskawa compared human and machine by sending them both through a number of challenges, including “diagonal cut” and “thousand cuts.”

It’s an impressive comparison that reminds us just how accurately robots can perform many human tasks, including techniques from ancient martial arts. Manufacturing robots aren’t just useful for moving products across an assembly line—if need be, they can also be programmed to fight.