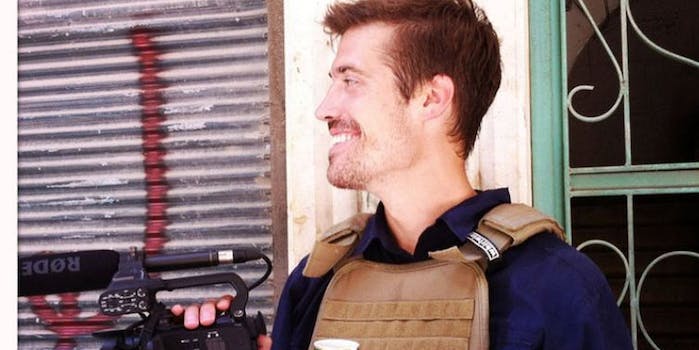 "I think it's deplorable and I think there should be an apology,"

In August, Islamic State militants in Iraq beheaded journalist James Foley and posted a gristly video of the murder to YouTube.

While the Islamic State’s stunning territory gains in Iraq and Syria had made headlines before the Foley’s death, the video brought the brutal group newfound attention in the United States. A recent Wall Street Journal/NBC News poll found that 94 percent of Americans knew about the execution, the highest level of public awareness of any single event since the poll began asking that question about major occurrences in 2009.

Unsurprisingly, Foley’s death has been taken up as a political cudgel by Republicans to hammer President Obama for his supposedly feckless strategy in Iraq. In a recent interview with NECN, Foley’s parents made their most direct statement yet about the politicization of their son’s death.

Foley’s parents accused Republicans of exploiting his murder to win votes and demanded that a campaign ad currently running in their home state of New Hampshire that features video of the execution be pulled.

“It’s deplorable and I think there should be an apology,” said Foley’s father, John, in the interview.

“It makes me very sad that people would use the brutality of our son’s death for their own political purposes,” added Foley’s mother Diane. “I would just like them to have the sensitivity and compassion to withdraw that image from their campaign ad.”

The ad was created by the group Secure America Now and is aimed at bolstering the campaign of carpetbagging former Massachusetts Senator Scott Brown in his attempt to unseat Democrat Jeanne Shaheen.

Following the family’s outcry, Secure Amercia Now has decided to honor their wishes and pull the ad.

“It has been brought to our attention that a news report image of American hostage James Foley that appeared in a Secure America Now video has upset his parents, so we have decided to take the video down,” Secure America Now President Allen Roth said in a statement. “The purpose of the video was to draw attention to Washington’s failure to secure our borders from real threats by terrorists. That remains our objective and we will continue to engage in this public debate.”

Both the Brown and Shaheen campaigns have slammed the ad as “inappropriate” and “disgraceful,” respectively.

This clip isn’t the first political ad of the 2014 election cycle to make use of from the execution video. In a race in Arizona, Republican hopeful Wendy Rogers used an image from the video to attack Democratic Rep. Kyrsten Sinema. Similarly, Allen Weh, a GOP candidate mounting a long-shot effort to unseat New Mexico Senator Mark Udall, also campaigned using images from the video. Weh’s ad came only a few days after the video depicting Foley’s death began circulating online.

Even though the ad has been taken down, Roth insisted to NECN that the controversy it sparked is largely about Brown’s opponents attempting to score political points of their own. “I am saying there is an attempt to create a controversy here and that attempt is purely political.”

While the 15-second ad, which has since been removed from YouTube, was created to support Brown, the group that made it is barred by law from directly coordinating with the truck-loving Republican’s campaign. Thanks to the Supreme Court’s 2010 Citizens United decision, outside groups not affiliated with any specific candidate are allowed to spend unlimited amounts of money to influence elections as long as there is no direct coordination with the candidates’ official campaign infrastructures.

This ad is not the first time that Foley’s parents have been drawn into the media swarm around their son’s death. Shortly after Foley’s execution, they made public an email they had received from Islamic State militants prior to his death threatening a long campaign of violent action.

“You do not spare our weak, elderly, women or children so we will NOT spare yours,” the message read. “You and your citizens will pay the price of your bombings!”