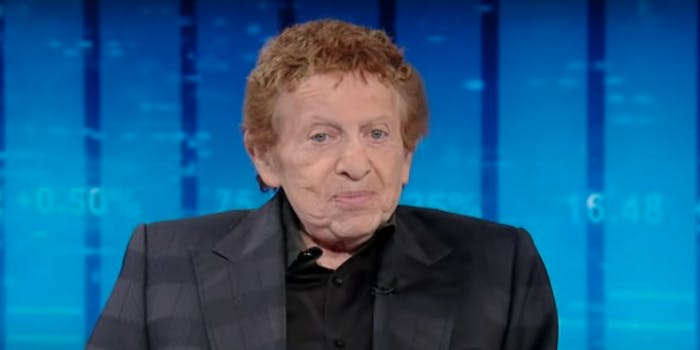 Comedian Jackie Mason blasted the socialist as a 'nutcase.'

A registered Republican and a vocal supporter of Israel, Mason’s rant appears to have been induced by an edited interview clip pushed by right-wing media outlets last week in which Ocasio-Cortez characterized Israel’s conflict with Palestine as an “occupation.”

He then went on to attack the Democrat’s platform, which includes Medicare for all, regulation for big banks, and the abolishment of Immigration and Customs Enforcement (ICE).

“Calling her to the left doesn’t even tell her story,” Mason jokes. “She makes Putin look like he is on the right. She’s to the left of Putin.”

It was this comment, in particular, that drew criticism online. Parker Molloy pointed out that Russian President Vladimir Putin is not the communist that Mason appears to believe he is.

Others were amused that the Caddyshack 2 actor seemed to be a regular political commentator for the right-wing news outlet.

“Oh shit I wonder what the star of Caddyshack 2 has to say about our current hellscape?”

Putin, who is widely admired by the European far-right, is notoriously difficult to place on the traditional political spectrum. While he started his career working for the Soviet Union’s main security agency, Putin has authored a uniquely Russian brand of non-ideological conservatism.

None of that matters, of course, when it comes to point scoring. Ocasio-Cortez, who defeated incumbent Rep. Joe Crowley (D-N.Y.) in the primary fight for New York’s 14th congressional district, promotes the progressive political position of the ever-growing Democratic Socialist movement and has become a real, regular target for conservatives.

“You look at this girl Ocasio-Cortez or whatever she is, I mean, she’s in a totally different universe,” he said.

DeSantis’ spokesperson did not respond to requests for comment on the remarks. But it’s quite clear that the aim was to undermine the leftist, who’s seen by many on the right as a threat.