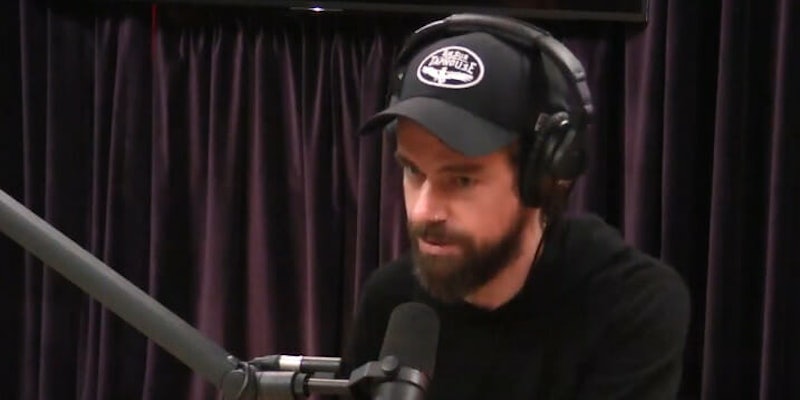 He was joined by the company's chief legal officer.

Twitter founder Jack Dorsey appeared on comedian Joe Rogan’s podcast on Tuesday for the second time in a month for a showdown over his company’s policies and actions, especially banning conservatives.

Back to conversation with @joerogan. This time with @Vijaya and @Timcast! pic.twitter.com/Q9daJhWGPw

When he appeared on the podcast on Feb. 2, Dorsey discussed at length Twitter’s policies and what he said were the company’s responsibilities.

Afterward, Rogan was accused of softballing questions by some angry conservatives who believe that the social media company actively persecutes those on the right. They criticized the comedian for not discussing the banning of high-profile, fringe-right personalities. The podcast even resulted in a feud, only recently resolved, between Rogan and his friend Alex Jones of conspiracy theory peddling website InfoWars.

Rogan was not going to open himself to the same criticism twice, however, and invited former guest Pool to engage and question the Twitter representatives.

Pool, who regularly covers the culture war on YouTube, describes himself as a “social liberal” and, like Rogan, disassociates from the right. But Pool has been criticized by some activists on the left as “alt-right adjacent.”

On the podcast, Pool was keen to discuss instances in which Twitter enforced suspensions against conservatives and to assert that the company was implementing its policies with ideological bias.

Gadde countered that the platform seeks to promote free speech and that punishment for accounts which violate the company’s harassment guidelines is applied without political bias or the intent to “police ideology.”

Some liberals were furious that Dorsey was back on Rogan’s show.

Others lashed out at Pool.

Joe Rogan is currently live-streaming with conspiracy theorist Tim Pool (@timcast). Pool is known for being a moronic neo-nazi lapdog that has defended Laura Loomer and Gavin McInnes. A week after hosting Alex Jones, Rogan is again proving why he is a gateway to the alt-right. pic.twitter.com/nm0sUAjpen

In case you wanted to see an ex VICE adventure tourist and YouTube grifter who has spent years trying to make soft internet censorship seem like a partisan issue grill @jack now is your chance https://t.co/GmoImtiI2d

Some users were delighted to see Twitter taken to task.

Tim Pool on this Joe Rogan podcast telling it like it is straight to the faces of these jackasses running Twitter, about damn time someone had the balls to do this

The most important podcast on JRE yet. Twitter censorship. I really hope Joe asks the right questions. Jack Dorsey (Twitter CEO) is being confronted by Tim Pool – or we can only hope. https://t.co/5aTYjRsDy0

Meanwhile, a host of internet users simply shared the link, flagging what they anticipated would be somewhat of a car crash bid by Twitter to do public relations via podcast.