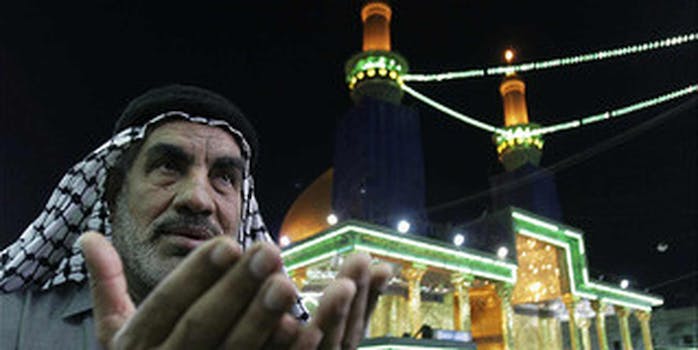 How Iraqi lonelyhearts use Facebook for romance, marriage, and sex

In old-fashioned Karbala, many Iraqis are still married by family arrangements, their spouses picked out by older relatives. It’s a holy place for Shi’ite Muslims, home of the revered Imam Hussein Shrine. As heat waves shimmer up the sides of the massive tomb in the center of the city, pious pilgrims pour into the area to see the place said to where the archangel Gabriel consoled a weeping Muhammad, and it’s the location of the Battle of Karbala.

Karbala’s status as a sacred land is so pronounced that this month, Iraqi Prime Minister Nouri al-Maliki called for Karbala to replace Mecca as the city that Muslims pray toward. Suffice it to say that Karbala is not an example of a modernized Iraq—it is all things ancient.

Yet Facebook has reached the ancient streets of Karbala, and it’s changing the way people date.

As Ibrahim al-Jibouri reports from within the city, Karbala residents are using Facebook to circumvent the traditional modes of courtship. Al-Jibouri talked to numerous residents who found love by accepting friend requests and posting status updates.

Al-Jibouri talked to student Afra Hussein, who praised the site for its ability to uncork tightly bottled feelings. “I received a friendship request from one of my fellow students at university,” she says. “The relationship developed online and now we are married. Basically,” Hussein says, “Facebook provides young Iraqi people with a venue where they don’t need to be embarrassed or ashamed—they can declare their feelings more easily online.”

Now, these anecdotes are just that—anecdotes, which highlight that courtship-via-Facebook has spread to even the most conservative pockets of one of the most conservative nations in the world. They don’t denote a widespread trend, because Iraq still has very limited Internet penetration, with just five out of 100 people with access. The government tried to turn off the Internet last October for those who did manage to use it, and while the attempt was unsuccessful, the low percentage of Iraqi nationals logging on means that the percentage of Iraqis using Facebook for matchmaking is low (even though 77 percent of Iraqis with Internet access have opened Facebook accounts). But it is happeneing, and if Mark Zuckerberg’s Internet.org project is at all successful, this usage of Facebook could gain momentum—and change the way Iraqis in the country’s old world cities fall in love.

This micro-shift away from brokered marriages could help temper violence against women and suicides, since these are more frequent in areas of Iraq where arranged marriages are common, according to the New York Times.

But this development isn’t without problems. As al-Jibouri’s interviews revealed, these Facebook dalliances can cause a fracas if discovered by hostile family; a Karbala University student named Hassan Juma said he was beaten by the irate brother of a girl he accidentally friend-requested, because the brother assumed something was going on between the two romantically. If romances unsanctioned by society are found out, there can still be serious repercussions—including honor killings.

And long-term monogamous relationships aren’t the only kind of amorous interactions going on. Facebook is used as a platform for sex trade in Iraq as well, with some of the more popular digital prostitution hubs garnering over 71,000 Likes for its page, according to Al-Monitor, an online news site covering the Middle East. Expect pages like that to increase as Facebook adoption increases in Iraq as well, since nature abhors a vacuum for deeply problematic sexual transactions.