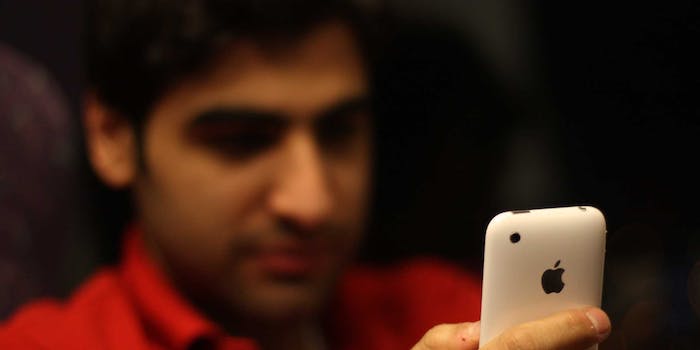 If you have a college degree and an iPhone, you might be a stereotype. Online advertising network Chitika is claiming in a new study that it found a link between iPhone usage and education level. How accurate that information is, though, is worth questioning.

According to Chitika, its findings “establishes a positive correlation between iPhone smartphone usage share and two independent variables; percentage of population with a bachelor’s degree or higher and population density.” States with more iPhone usage were more likely to have a high percentage of college graduates, essentially. If you go even more basic, iPhone users done learned better.

The company warns that the data is “not comprehensive” and lacks a “great deal of granularity from the analysis” as it was viewed from a state level rather than a more condensed region or community.

That’s probably not enough reason to stop fanboys from running with the study like it’s undisputed fact. Luckily for Android lovers, you don’t need a college degree to dismiss most of these findings.

Chitika gathered its data based on ad impressions on the company’s Cidewalk advertising platform catalogued between Dec. 25 through Dec. 31, 2014.

“The location information we catalog along with the impression is where the user was located when they generated that impression,” Andrew Waber, market analyst at Chitika told us. “Out of state visitors may have had some impact, but it’s difficult to quantify until we revisit the data further along in the year.”

AAA projected 98.6 million people in the United States traveled fifty miles or more from home during the year end holiday period, defined as Dec. 23, 2014 to Jan. 4, 2015. About a third of the United States spent the period Chitika was tracking away from home.

A considerably smaller percentage of users who use ad-blocking software or a VPN to access the Web may also skew data.

While Chitika suggests a correlation between iPhone ownership and higher education, the link has nothing to do with the actual iPhone user.  “What the data and model point to is a correlation between state-by-state iPhone usage rates and the state-by-state percentages of residents holding bachelor’s degrees or higher,” Waber explained. “ These should not be seen to reflect individual user characteristics.”

It’s not a great way to make generalizations about a user base regardless, as it’s a measurement of usage not of users. Let’s use a highly unlikely but technically statistically possible scenario: Massachusetts has the highest percent of citizens with a college degree. Let’s say all non-degree holders in Massachusetts are iPhone users—still a majority of the state’s population. To Chitika, there’s still a correlation between high iPhone usage rates and college educated people because the state has a lot of both.

Even still, the idea that iPhone usage in states in any way lines up with those who have completed higher education seems unlikely according to Census data.

The top states for iPhone usage according to Chitika are Alaska (21st in percentage of persons with a bachelor’s degree or higher), Montana (19th), Vermont (7th), Hawaii (12th), and Mississippi (47th).

The bottom five in iPhone usage similarly have little parallel to college graduates in the state. New Mexico had the lowest (28th in bachelor’s holders) followed by Iowa (36th), Delaware (20th), Wisconsin (30th), and Washington (10th).

At best what you’re left with is a scatter plot with a slight trace of a trend based on data gathered with questionable methods. It’s the magic eye picture of data finds—squint hard enough and you might see the hidden image, but look at it as a whole and you’ll just be wondering where the damn sailboat is.