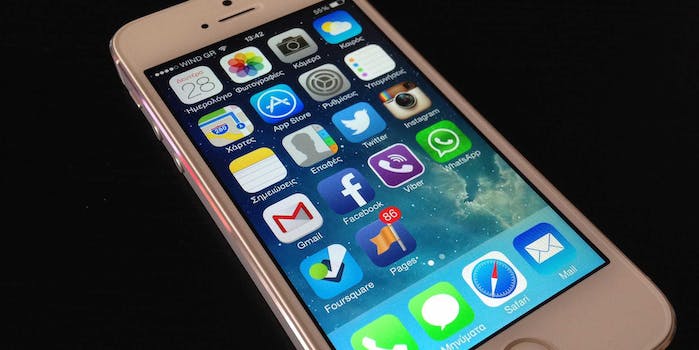 This viral text message hack can cause iPhones to restart

Don't send your friend this text.

As hackers are getting more sophisticated and security measures continue to improve, it’s a simple text message that can take down an iPhone. A recently spotted issue brought to light by a Redditor points to a line of unicode that can cause the iPhone and Apple Watch to crash.

“We are aware of an iMessage issue caused by a specific series of unicode characters and we will make a fix available in a software update,” an Apple spokesperson told the Daily Dot. Apple declined to comment on the timeframe for the fix.

Redditor aus10_t8um mentioned the problem in /r/iPhone and several users confirmed seeing the same message appear before having their iPhone shut down. On Twitter, users have been complaining about the issue as well.

Ok yall can stop sending the lil iPhone text message that restarts your phone… After the 3rd time it's no longer funny!

The text consists of standard text, Arabic characters, and unicode characters. Redditor alien_screw suggests the only part that matters is the unicode, stating the rest of the text is irrelevant to the actual issue. Another redditor, sickestdancer98, seems to confirm this theory in a further explanation of the issue.

According to sickestdancer98, the Unicode characters wreak havoc on the notification banner, which attempts to present the text and crashes in the process when it can’t display the characters. The issue shouldn’t occur in the message itself, just at the banner’s attempt to display the incoming text.

Another redditor confirmed the issue also affects Apple Watches, making it one of the earliest crash bugs discovered for the new device. Sickestdancer98 suggests the potential vulnerability is not new and has been around since iOS 6. Its use is just becoming widespread now.

Until a fix is issued for the problem, the pranks are likely to continue. Just remember, if you send the text to a friend once, it’s a joke. If you do it multiple times, you’re just a jerk.

Photo via John Karakatsanis/Flickr (CC BY 2.0)