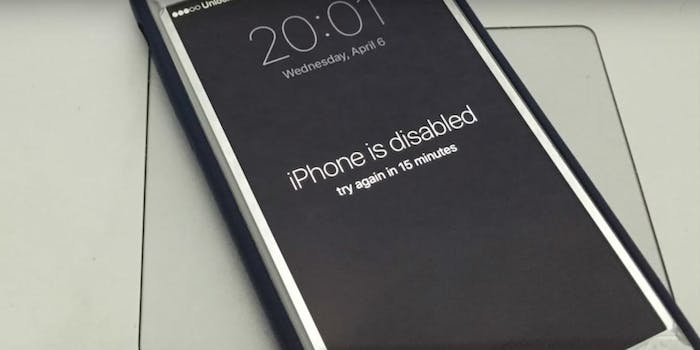 She has two options: Delete everything or wait half a century.

We’ve all seen the error message that pops up after you input the wrong passcode into your smartphone. And if you keep getting your passcode wrong, you’ll have to wait even longer to try again. Eventually, though, you figure it out and breathe a sigh of relief.

But what happens if you can’t get back in? A woman in China found out the hard way when her two-year-old boy used the incorrect passcode so many times it locked up her iPhone for 48 years, the South China Morning Post reports.

The iPhone owner from Shanghai reportedly gave her son the phone to watch educational videos. She returned to find it locked for half a lifetime, essentially turning it into a time capsule of digital memories. She then did what anyone would do in the situation: ask the guys in blue shirts. Unfortunately, the Apple support folks at her local shop said she had two options, one worse than the next. She could either factory reset her phone or wait half a century.

The Apple employee also told her that there had been instances of people locking themselves out of their iPhone for 80 years, according to the SCMP.

Apple has not responded to our request for comment on whether it’s possible to disable a phone for so long.

Lu reportedly doesn’t want to reset her device and lose her files and photos. Her iPhone has been locked for more than two months. If her phone is backed up or files were sent to iCloud, then she shouldn’t have problems recovering them.

If not, then let the countdown begin.