This is not what you want to see during your flight.

Apple’s iPhone may be the hottest smartphone around, but one woman’s iPhone 6 took that label a little too literally during a recent flight to Hawaii. According to reports, the phone began shooting 8-inch flames while the plane was midair, resulting in panic among passengers and crew.

Anna Crail, the 18-year-old owner of the phone, told KOMO News that the phone spontaneously combusted during the Alaska Air flight. “All of a sudden there was like 8-inch flames coming out of my phone,” Crail explained. “I flipped it off onto the ground and it got under someone’s seat, and the flames were just getting higher and a bunch of people stood up.” 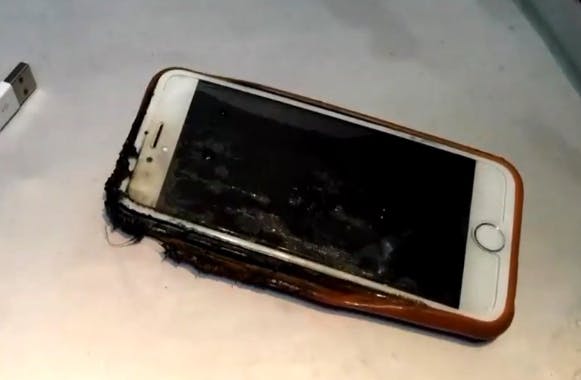 According to Alaska Air, the flight was roughly an hour and a half from landing in Hawaii when the phone set itself ablaze. The company noted that both it and the Federal Aviation Administration are further investigating the incident, though no injuries or damage to the plane itself were reported. ABC News reached out to Apple, which said it is in touch with the family and Alaska Air regarding the incident.

Spontaneous smartphone combustion is not a new trend in smartphones. Many different models from almost every manufacturer have fallen victim to overheating failures and battery explosions in recent years. In most cases, the lithium-ion battery technology—which has proven to be volatile when safety features fail—has ultimately shouldered the blame.

As always, manufacturers recommend using only certified replacement batteries and chargers, as third-party versions have often been associated with both hardware failure and unexpected flames.