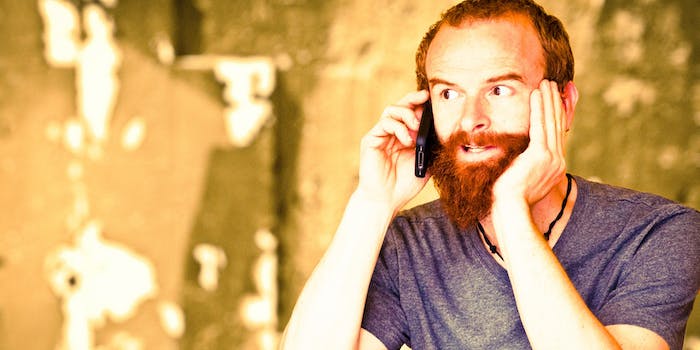 iPhone 6 users are reporting that their hair is getting stuck in the hardware.

Beard-growers and long-haired humans, beware: Hairgate is here. The newest iPhone 6–related “-gate” has hit, as allegations have emerged that Apple’s latest device rips strands of hair from your head. Unlike Bendgate, your iPhone 6 is the one inflicting harm on you, instead of the other way around.

That is, if any of these allegations are real.

The problem first surfaced in an anonymous post in 9to5Mac, after which other disgruntled iPhone users followed suit. Apparently, hair gets stuck in the phone’s small crevice between the glass and the aluminum. When some users pull their phones away from their faces after making a phone call, their precious strands go with it.

Got a hair caught in between my phone and its plastic case the other day. Gonna send it all back for a refund. End it all. #hairgate

Anyone else getting beard hairs pulled by the iPhone 6/Plus? It catches my scruff in the seam and yanks it during calls. #hurts #beardgate

The seam on my iPhone 6 where the aluminum meets the glass is definitely catching my hair and pulling it out. #seamgate

Mashable put the hair-raising allegations to the test, trying to get an iPhone stuck in staffers’ beards, curly hair, straight hair, short hair, long hair, and so on. The results were overwhelmingly similar.

Forbes reports that the alleged hair-pulling gap doesn’t exist, explaining that there’s a bevel over where the small gap would be. There is a small gap, but one would have to have extremely thin hair in order for it to get stuck.

At this point, it’s pretty obvious that every time Apple releases a new product, troves of people will find something to complain about, and the iPhone 6 and iPhone 6 Plus have been no exception. Still, the problems haven’t deterred sales. The company sold 4 million in the first day and 10 million within three days of its Sept. 19 release date and may have already hit the 20 million mark.

Photo by David Goehring/Flickr (CC BY 2.0)