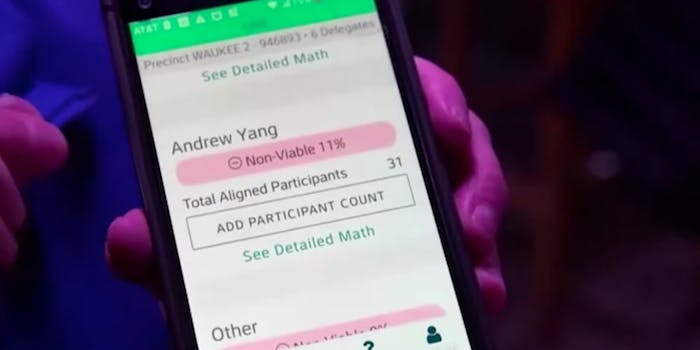 It was reportedly built on tutorials and starter kits.

IowaReporterApp, the application that’s seen blame for the “disastrous” Iowa caucus, seems to have been a rush job–and that hurry produced ugly results.

According to a report by Vice’s Motherboard, cybersecurity and software development experts claim that Shadow Inc.’s Iowa caucus app was a “hasty” job. It was apparently built on tutorials and starter kits, which reminded some experts of training tools. But its build isn’t the primary problem. What caused the Iowa debacle was the use of a third-party verification system, which refused to process the data due to a formatting issue.

“We have this independent verification step,” Shadow CEO Gerard Niemira told Motherboard. “In the course of doing that, we had some code that would look at our results database and then move that over to the [Iowa Democratic Party’s (IDP’s)] quality control check environment.”

Then, things with the app went wrong.

“In the process of doing that, we had some faulty code that took the data and put it into a format that made it fail the checks by the IDP,” Niemira told Motherboard. “That was throwing up flags, which took time to resolve.”

There were other issues with the Iowa caucus app, too. The app’s ability to run on old versions of Android software provides cybersecurity issues thanks to outdated code. That could’ve been exploited to steal caucus data from those counting the votes. The DNC also refused to provide transparency in the development of the app, leading open-source activists to critique it.

“We were really concerned about the fact there was so much opacity,” Greg Miller, co-founder of the Open Source Election Technology Institute, told Motherboard. “I said over and over again trust is the product of transparency times communication. The DNC steadfastly refused to offer any transparency. It was hard to know what to expect except the worst.”