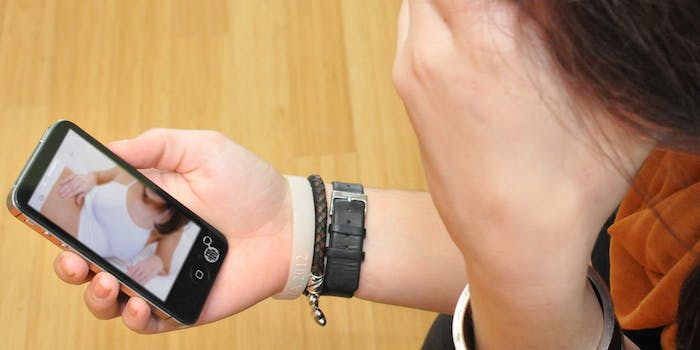 The real question about iOS 8: Will it make sexting easier?

You don't care about the HealthKit app. You just want to know how Apple will make it easier to send photos of your junk.

Apple’s unveiling of iOS 8 at the Worldwide Developers Conference on Monday included a lot of cool new features: the HealthKit application, the iCloud photo library, the updated group messaging system that allows you to (finally) exit from group texts. But the one question on everyone’s mind is: How will iOS 8 improve sexting?

As it turns out, substantially: The update features a new, Snapchat-like feature that allows photos and messages to self-destruct after a preset time limit, meaning iPhone users can send tit pics and crotch shots to their hearts’ content without worrying about whether they’ll automatically open them in front of a relative or coworker while scrolling through their library. Naturally, this got everyone on Twitter super excited:

Another feature in the iOS 8 update that could prove beneficial to sexters is the new QuickType, which uses a predictive keyboard that learns how you talk to various people to provide quicker auto-correct and fill-in suggestions. QuickType differentiates between various recipients, so it’ll provide different suggestions for your dad than it would for your significant other (which will ostensibly help you avoid humiliating autocorrect fails like these).

The new Tap to Talk voice messaging feature could also add an extra dimension to your prosaic “Now you’re touching me here/kissing me there” texts, in case you want to add some heavy breathing or moaning to the mix (though you might get some strange looks from your co-worker in the cubicle over).

The one drawback? These features are only available to other Apple users, so if your partner has a Droid or (heaven forbid) a Samsung Galaxy, they might want to trade in for an iPhone. Or you can trade in for another partner, either one.

Photo by Pro Juventute/Flickr (CC BY 2.0)