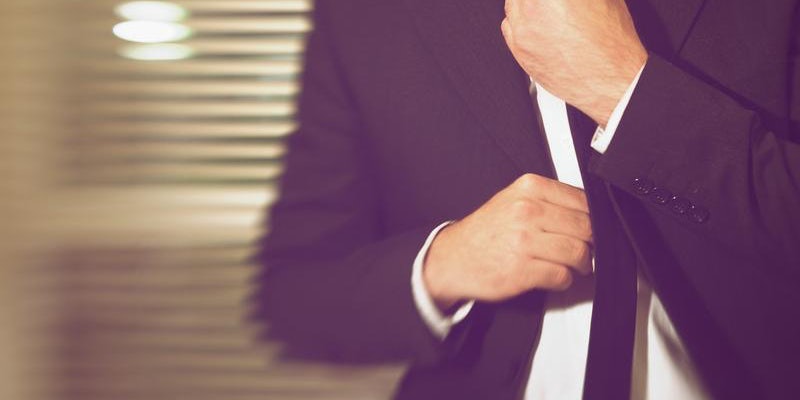 I used the Invisible Boyfriend app to make my version of the Perfect Man: Like my boyfriend, but better.

I met my boyfriend of six years, Alex, during my first year of college. We were smoking at the tables outside our dorm, and apropos of nothing, he started reciting Del Preston’s monologue from Wayne’s World 2. I’ve been madly in love with him ever since.

That said, there are some aspects of his personality that could, shall we say, benefit from minor augmentation. For instance, he hates leaving any social event before 4am, at which point he literally has to be dragged out by force. And his idea of cleaning up after himself is balling up his socks and putting them in a spot on the floor that already isn’t occupied by discarded Popsicle sticks.

So when I heard about Invisible Boyfriend, an app that lets you input fake biographical details to create your own imaginary boyfriend (or girlfriend), I was intrigued. Not because I wanted to imagine dating someone different, as there’s truly no one else in the world (with the possible exception of Chris Pratt and/or Alex Trebek ca. 1972) that I’d rather be with, but because I wanted to see if I could use the app to improve on my non-invisible boyfriend and create a version of Alex 2.0.

When I told Alex I was trying out the app to see if I could create a better version of him, he was dubious. “It sounds like that episode of Black Mirror,” he said, referring to the episode where a grieving widow commissions an artificially intelligent version of her dead spouse.

What I failed to mention to Alex was that if you really thought about it, that situation worked out pretty well for her. Husband 2.0 was hotter than the original husband, and better at sex. Even though she ended up getting so creeped out by him she had to put him in an attic… well, we don’t have an attic!

Then I had to describe what Alex looked like, by comparing him to photos of stock models. This was somewhat difficult, as they all were much more smiley than him. They were also more unkempt than my boyfriend, who has a collection of 65 ties and has been known to rant at length about how men don’t wear hats in the summertime anymore. I decided to pick the guy who seemed most likely to wear a hat. 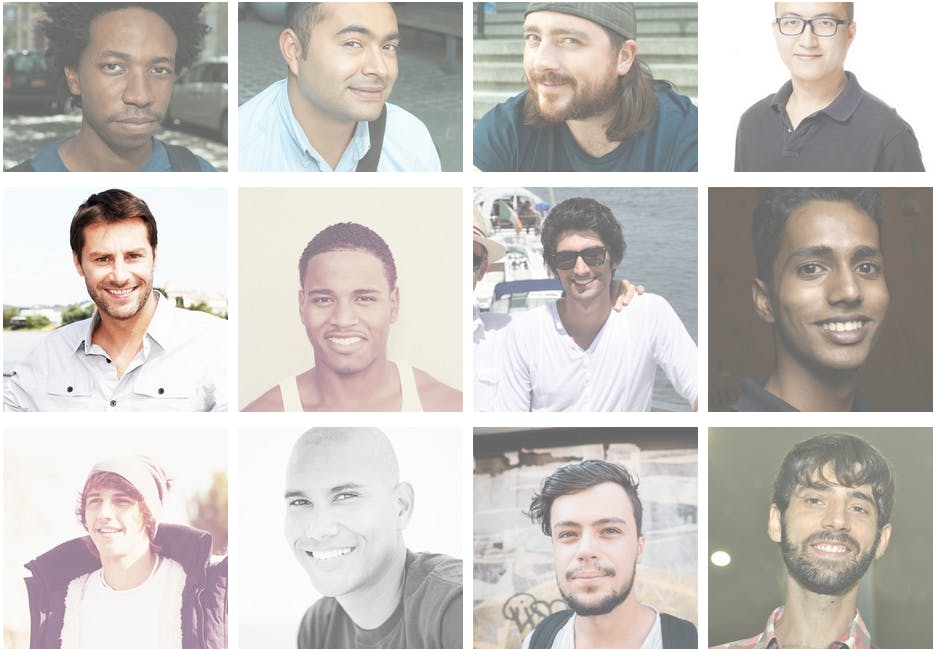 Then I had to choose his interests and personality traits. This proved difficult, because Alex is actually all of these things (with the possible exception of “cheerful,” because he’s from New York and that adjective literally describes no one born in New York.) I opted for “witty and educated,” on the basis of his memorization of the aforementioned Wayne’s World 2 monologue, which I feel reflects both his wit and his education. 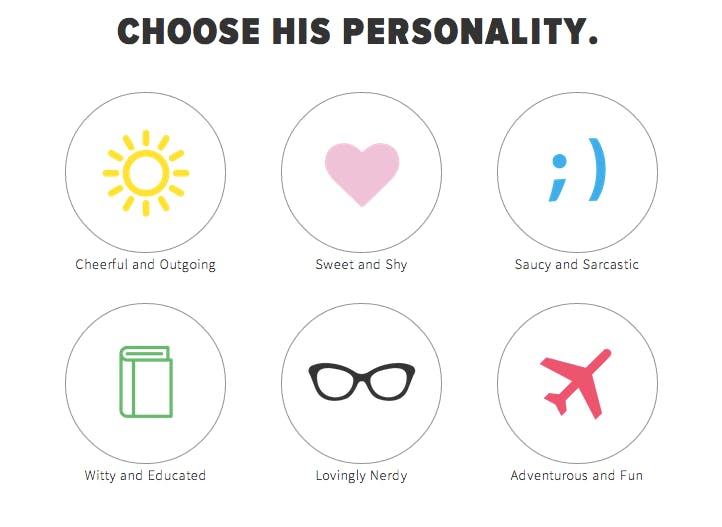 I was then asked to fill out my personal information, as well as my credit card information for the $25 Invisible Boyfriend fee.

The real Alex—who wouldn’t be caught dead using an emoticon of any kind—was sitting literally two feet away from me, not texting. I shuddered.

Tentatively, I texted back. 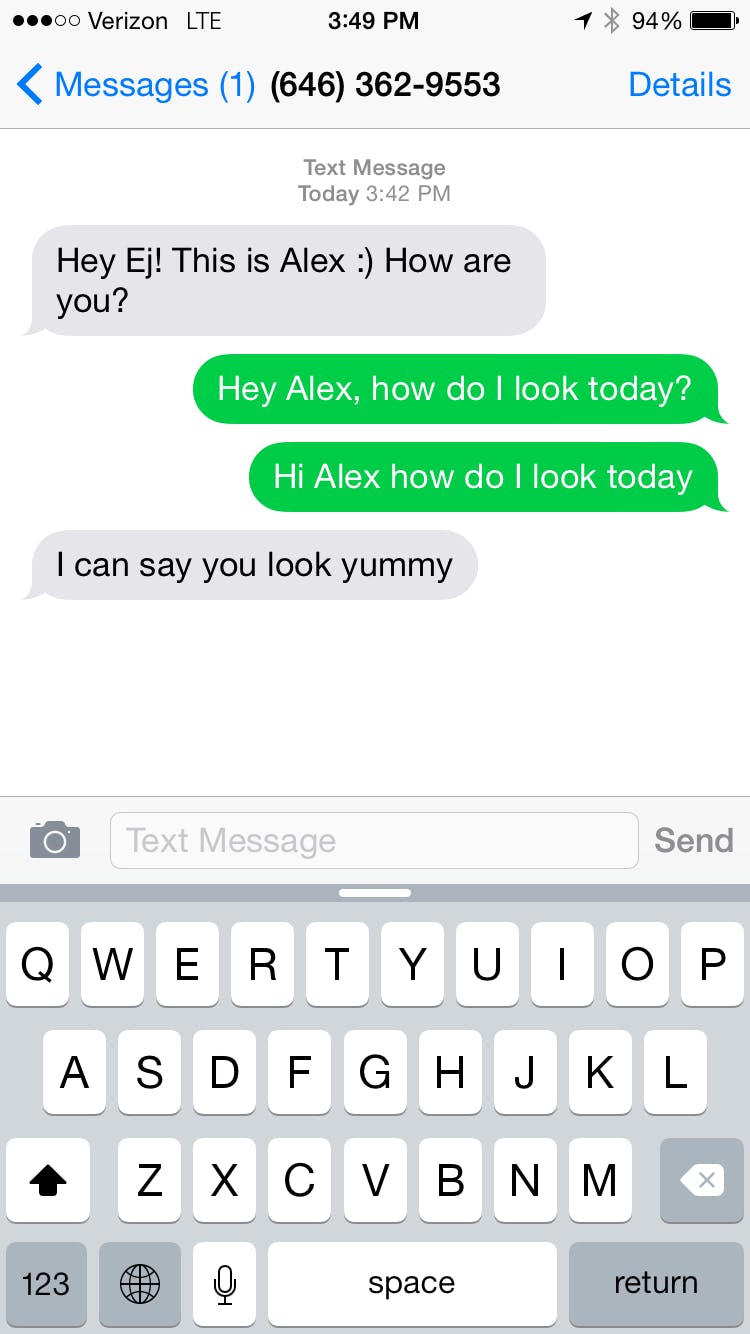 After a few minutes, he responded that I looked “yummy.” And he wasn’t wrong. My skin looked really good.

Emboldened by this turn of events, I decided to take my relationship with Invisible Boyfriend Alex one step further, so I could see how good his sexting game was. 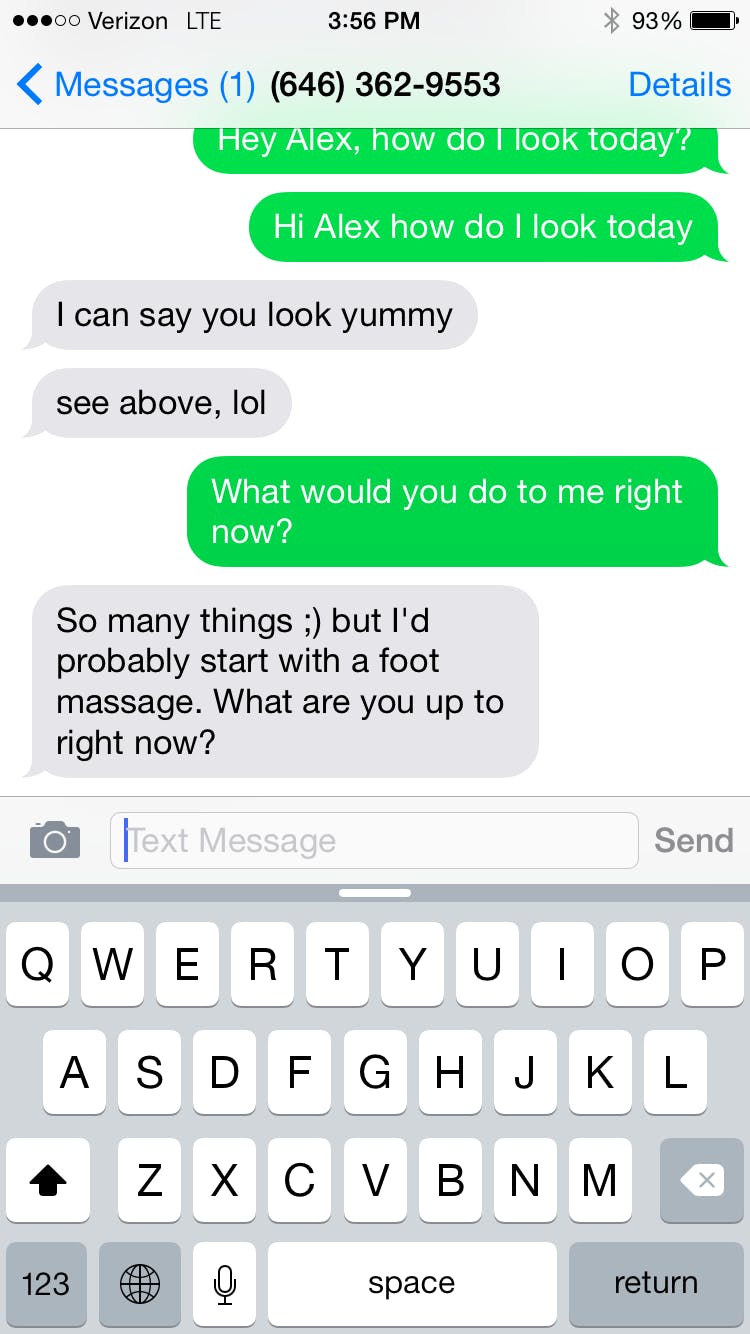 When I didn’t get a response, I made another subtle hint: 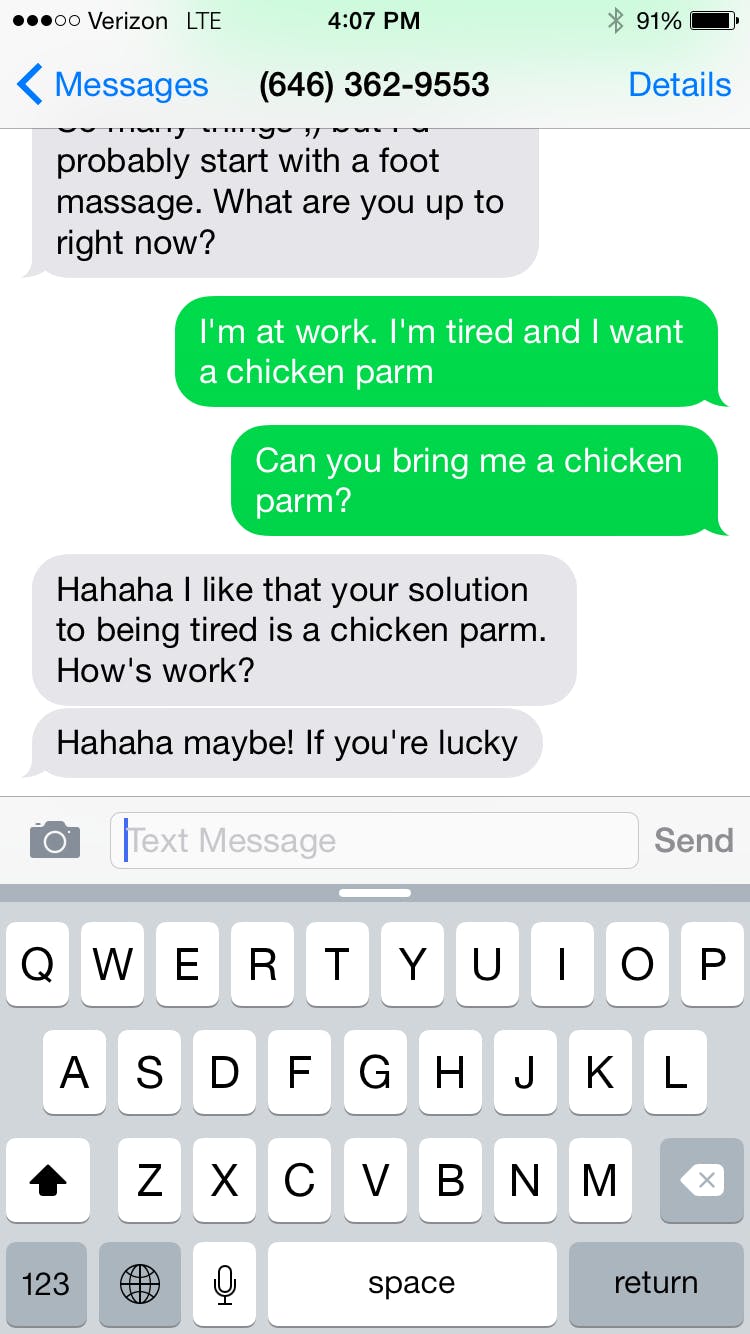 What kind of non-committal bullshit is that?

At this point, Real Alex was edging out Invisible Boyfriend by a country mile. But I decided to give him one more shot. 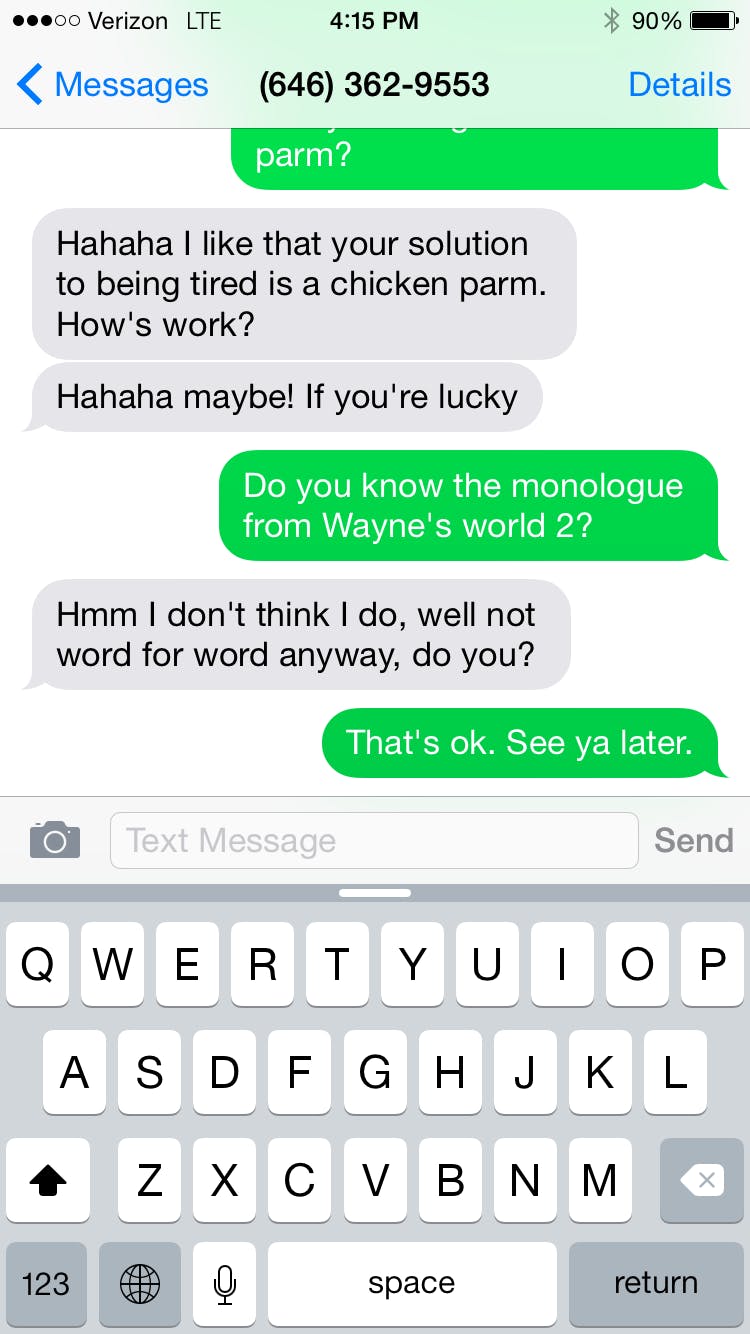 My brief dalliance with Alex 2.0, who had ultimately turned out to be Alex -1.0, had ended. So I hit Non-Invisible Alex up on GChat to tell him how it went. “I ended things with Invisible Boyfriend,” I told him.

“Yes,” I said. “But that’s OK.” And as I looked at my tie-loving, FOMO-having, Mike Myers-movie-quoting boyfriend a few feet away from me, pounding away on a keyboard, I knew that it really was. And if I was “lucky,” we would be dining on chicken parm tonight.

Photo by Jonathan Mueller/Flickr (CC BY 2.0)