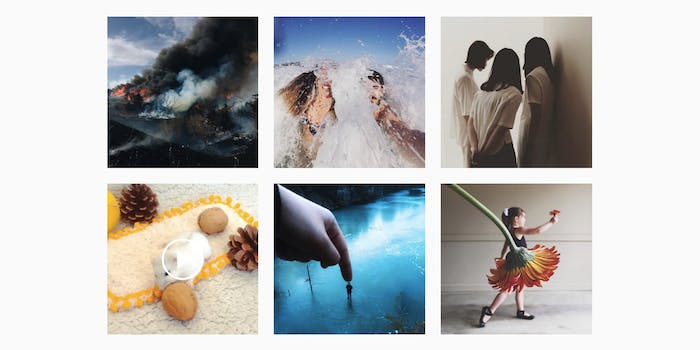 It will choose what it thinks you want to see.

Your Instagram timeline is about to look much different.

Instagram, which is owned by Facebook, is following in its parent company’s algorithmic footsteps and will begin rearranging timelines to show you the media that it thinks you’ll care about the most. Photos and videos will no longer display in reverse-chronological order.

The major change will likely upset many users.

The order of photos and videos in your feed will be based on the likelihood you’ll be interested in the content, your relationship with the person posting and the timeliness of the post. As we begin, we’re focusing on optimizing the order — all the posts will still be there, just in a different order.

Instagram displaying photos out of order isn’t all that surprising. It’s taking Facebook’s News Feed strategy and implementing it on its own platform. But Facebook’s algorithmically determined timeline hides content from many of one’s friends if it determines that the user won’t find it interesting enough; Instagram users are right to worry that the same thing might happen on the media-sharing site.

Twitter, too, is pursuing a more curated feed. It now shows tweets you missed at the top of your timeline, and users can opt into seeing “best tweets” they might have missed while away.

According to Instagram, people don’t see 70 percent of their feeds, which is why it’s moving away from the reverse-chronological layout. The company says the new layout will roll out “in the coming months.”