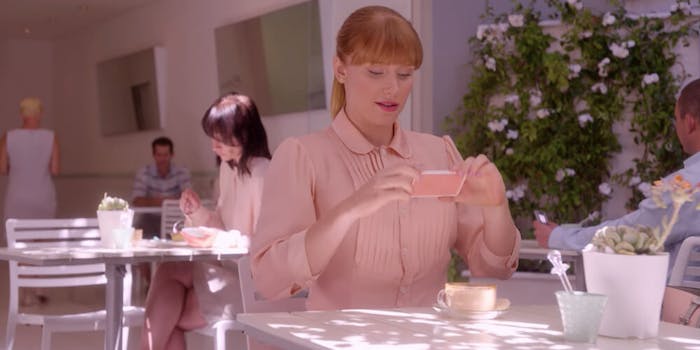 In the episode, everyone rates everyone IRL.

In an interview with the New York Times, Mosseri said he kept thinking about an episode of the British series. Though he didn’t name which episode, he was likely influenced by “Nosedive”—starring Bryce Dallas Howard—where characters rate everyone they interact with on a scale of one to five stars. The rating system affects how people are treated and has served to show social media’s impact on society.

Instagram has been testing hiding likes since last year. The feature, called “Project Daisy,” allows people to see how many likes their own photos and videos get, but doesn’t show them for others.

Instagram began testing the feature in Australia, Brazil, Canada, Ireland, Italy, Japan, and New Zealand. The feature was also rolled out in November for some U.S. users.

Instagram has long said the move is an effort to make users feel less self-conscious about their online behavior.

“It’s about young people. The idea is to depressurize Instagram, make it less of a competition, give people more space to focus on connecting with people they love and things that inspire them,” Mosseri said in a previous interview.

Still, users have expressed mixed feelings about “Project Daisy.” According to a study in Social Media Today, social media influencers almost unanimously experienced a drop in their like counts in countries where likes were hidden.

Mosseri told the Times, he worried about how to navigate the change without angering influencers.

“I just don’t want to piss anyone off,” he said.