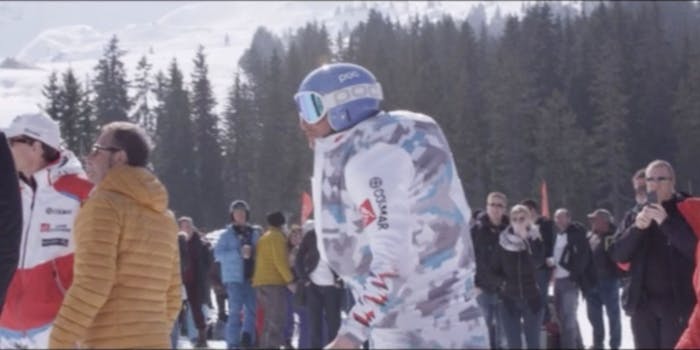 It's going to blow up.

Because of the popularity of sports like football, usually when we think of impactful hits taken by athletes, we’re worried about concussions and blows to the head. In&motion thinks the body is just as important to keep protected—it’s so important, in fact, that the company wants to strap an airbag to it.

The unusual idea came to the team from years of skiing in the French Alps, according to CEO and cofounder Rémi Thomas. Despite the powdery appearance of snow, falling while speeding downhill can commonly lead to bruises and worse. According to the American College of Sports Medicine (ACSM), approximately 30 to 40 percent of all skiing injuries happen to the upper body.

To combat the impact caused by falls on the slopes, In&motion built a protective vest that serves as an on-body airbag in case of emergency. It sounds like a solution dreamed up in a Looney Tunes episode, but it’s real and on display at CES.

Thanks to a built-in fall detection system, the airbag is able to analyze the path of a rider and determine when they’ve lost control and are going to have to brace for impact. Instead of allowing their body to absorb the blow, the pack is deployed in under 100 milliseconds. Upon opening, the airbag protects the neck, chest, abdomen, hips, and back of the fallen skier. This can provide the support needed to prevent injuries to other parts of the body as well, such as whiplash and other head traumas.

The airbag doesn’t just make it easier to get back up—it makes it easier to try again, too. The computing algorithm processes what went wrong in each instance of a fall, calculates what the rider could have done to have prevented the outcome, and feeds those results back to them so the airbag won’t have to deploy on the next run.

In&motion’s system sounds ridiculous, and looks the part when in action. When it expands, it looks like a Carrot Top prop, an emergency fat suit for a comedian on his way to the casting call for a Mrs. Doubtfire reboot.

But the device is serious business—at least to International Ski Federation (FIS). The organizing body behind winter sports approved the airbag to be worn by downhill ski racers during the 2015-2016 racing season. With an emphasis on the professional ranks, In&motion plans to expand its user base to other competitive skiers, with a retail version available in stores in time for the 2016-2017 skiing season.

Thomas told the Daily Dot his company was looking beyond just skiing when imagining applications for the airbag technology. He said he envisioned a version of the device being equipped to everyone from bikers and motorcyclists to other extreme sports participants who put their bodies in harm’s way.