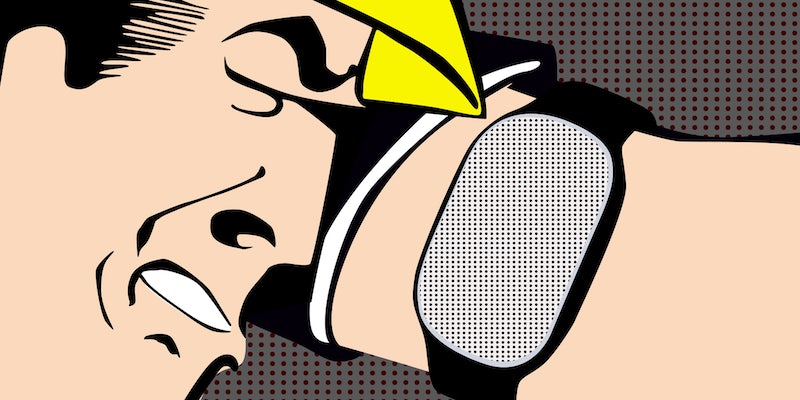 Is this million-dollar crowdfunded fitness tracker a fraud?

A revolutionary new health tracking device has raised almost $1 million dollars, along with plenty of doubts over its effectiveness.

Imagine a fitness-tracking wearable device that keeps tabs on everything from calorie intake to your hydration levels, all through sophisticated on-board sensors—no laborious data entry or meal-tracking required. Sounds too good to be true, right? That’s because it almost certainly is.

The Healbe GoBe is a new fitness tracker that’s currently in the final stages of a phenomenally successful crowdfunding campaign, having raised almost $1 million on Indiegogo, 10 times its original target. It makes bold claims as to being able to measure “calories consumed and burned, activity, hydration, sleep, stress levels, and more.” Over the last few weeks, however, Silicon Valley news site PandoDaily has been aggressively disputing the tracker’s capabilities, going so far as to label the claims as “bullshit”.

With a week left of the campaign, backers may well be paying for technology that possibly doesn’t exist—and may not even be physically possible. Clinical Dietician Michelle McDonald told PandoDaily that the technology to noninvasively measure glucose levels, one of Healbe’s claims does not exist. If it did, it would revolutionize treatment of diabetes: “Indiegogo is the last channel you’d go through,” he said.

Other experts described the science behind the technology as “some straight Ghostbusters, Peter Venkman bullshit,” and that if it were real, it couldn’t have “just magically come up out of thin air,” as Healbe appears to have done. The company has yet to release any substantive scientific evidence for its claims, and a representative from the Federal Trade Commission told Pando that “based on the scientific proof offered by the company so far, the Healbe would not be allowed to advertise via traditional media.”

There are further red flags. There’s little-to-no online history for any of the team behind the Healbe GoBe, despite the extensive professional experience that would be required to develop a technology this sophisticated. The company is based in Moscow, rather than San Francisco as originally asserted (though the company employs an American PR team). Pando has been unable to locate any U.S. patents related to the Healbe GoBe, despite its supposedly revolutionary technology.

The Healbe campaign has raised serious concerns for consumers about Indiegogo as a crowdfunding platform. When PandoDaily reached out to Indiegogo, the crowdfunding platform made no attempt to shut down Healbe’s campaign. Instead, the company deleted its anti-fraud guarantee, which previously stated that company had a review process that would allow it to “catch any and all cases of fraud.”

Despite the seemingly overwhelming evidence that the Healbe GoBe is at best misguided, and at worst outright fraudulent, Indiegogo told PandoDaily that the product was cleared by their anti-fraud methods, and it has “no reason to believe that this company’s Indiegogo campaign is in any way fraudulent.”

Demands for refunds are beginning to pour in on the Indiegogo fundraising page. “I can’t believe I fell for this,” wrote one disgruntled backer. However, it’s impossible to know how many people remain blissfully unaware of the controversy surrounding the Healbe GoBe.

This isn’t the first time Indiegogo has played host to potentially fraudulent medical technology. Six months ago, TellSpec raised $400,000 for a keyring-sized scanner that claimed to provide detailed nutritional information on food at the push of a button. The claims were bold but the science was bunk, and it’s unclear if the product will ever see the light of day. Estimated shipping has now been pushed back to Dec. 2014.

The Daily Dot reached out to Indiegogo with questions regarding its criteria for determining fraud and the concerns raised about Healbe’s campaign. The company responded with the following statement: “Every campaign that launches on Indiegogo is put through the amount of scrutiny and investigation that it requires, and this campaign is no different. We have customer-driven, algorithmic and operational processes that make Indiegogo a trusted platform worldwide.

“Indiegogo allows people from all over the world to join together in pursuit of new ideas and inventions, with the crowd—not an application process or gatekeeper—collectively deciding what ideas are worthy of funding.”

The company claimed to be planning third-party testing as early as next month. However, that would be after the campaign had closed and backers’ money had been collected.

Healbe declined to disclose the number of people who have requested refunds.