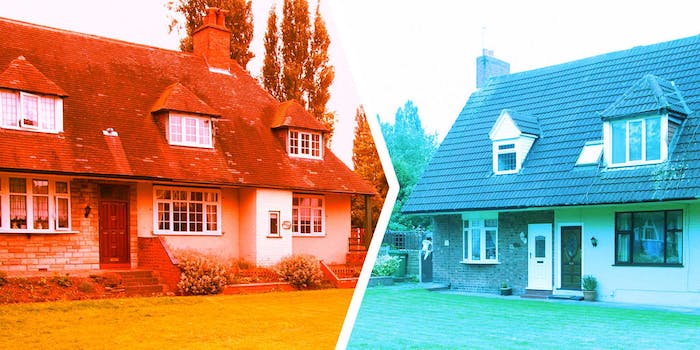 IFTTT is quietly, creatively powering the Internet of Things

If you can dream it, you can IFTTT it.

When my parents unwrapped the Nest I got them for Christmas this year, I saw a look of “what…?” cross their faces. I’d expected immediate recognition and then, obviously, excitement. It wasn’t until two days later, when their dumb thermostat unexpectedly broke and the repairman offered to install their Nest, that they started to realize what the thing—an Internet-connected thermostat—actually does.

The next roadblock, though, is getting them to put it through its paces—beyond the Nest app, beyond twisting that little dial (such a satisfying click-click-click), beyond passively monitoring their energy savings.

That’s where IFTTT comes in. The platform, which stands for If This Then That, is the great communicator of the smart market; it’s what lets you use other platforms to tell your smartwatch, or thermostat, or whatever, to do something. To do anything, really. Users are welcome to create their own recipes, triggering the connected world around them to act as they see fit.

Essentially, IFTTT is the quiet enabler of the smart devices revolution. It’s bridging the gaps left by disconnected operating systems and developers who won’t or can’t make devices and networks talk to one another.

Linden Tibbets, the cofounder of IFTTT, has an elegantly simple explanation for the service: “We help people have creative control over the digital things in their physical world.”

“We have control over our physical environment, and it really struck me that the digital world continues down this collision course with the physical,” says Tibbets. “Everything in the physical world is starting to be represented in the digital world, and so people needed a new set of tools so that they can be creative in their world.”

“I think what we’re doing now is just a small taste of how it will all eventually play out.”

Prior to founding IFTTT with his brother and cofounder Alexander, Tibbets worked in video games and electronic arts, eventually finding himself at design firm IDEO. “I think I learned more at IDEO than I did in my four years of college,” he says. “A lot of what I learned there applied to the idea for IFTTT.”

The connected-devices revolution has forced IFTTT to happily evolve at a rapid pace. Originally, the platform was largely used for Web-based triggers; making sites and and Web-apps talk to each other. (I tell Linden that my first experience with IFTTT was using it to get email alerts when an apartment in my specific price range in the exact neighborhood I wanted would hit Craigslist; it’s in fact how I snagged the perfect place. The lister told me I emailed him only seconds after he posted the ad.) But of course, we’ve moved fast and far beyond email alerts.

“When we launched in 2011, I think our first channels were Twitter and Facebook, email, SMS, and weather was incredibly popular,” Tibbets recalls. “The first Internet of Things—the first true connected device we worked with—was Belkin and its Wemo Switch and Wemo Motion. We worked with them for the better part of a year to make that happen. We started bridging the gap between the physical and digital. 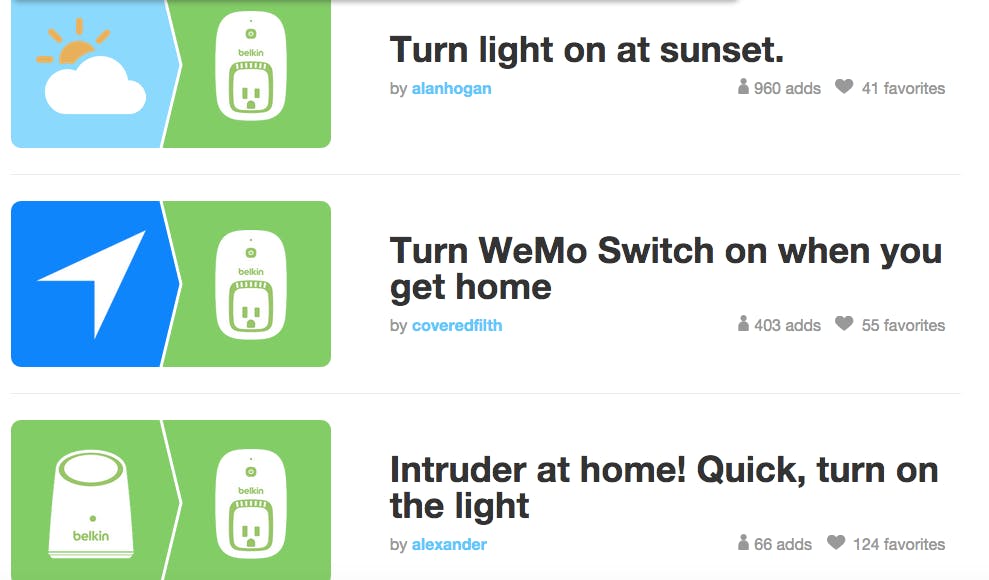 “That was a huge moment for us in 2012. We knew that what we were building was going to be super relevant as this market grew.”

Watching IFTTT and the device channels and recipes it has grown is a nice parallel to how the Internet of Things revolution has exploded. First, simple commands that triggered Web actions to make your smartphone do something helped us tip-toe into this market, and now here we are, texting to unlock our doors or turn on our Christmas tree lights. Clearly, IFTTT’s expanding possibilities reveal what we can do with our smart world.

A quick glance at some of the current recipes is all you need to realize this: Make your lights flash when the ISS passes over; get a text if your smoke alarm goes off; log and monitor your weigh-ins on your fitness tracker.

But Tibbets says we can expect more. “I think what we’re doing now is just a small taste of how it will all eventually play out,” he says. “I think we’re still in the first phase, where we’re just trying to get connected still; take all these dumb objects like refrigerators, thermostats, cars, and get them online. There’s still a monumental effort involved … but we’re quickly moving into the second phase, where we’ll start to see some brands start to create vertical ecosystems. You can see it now with Nest and Dropcam.”

He’s also got a nice system going where his Withings scale will text his girlfriend his weight when he hits above his target number.

Which begs a question: Are these growing companies and the apps they pair with their smart devices going to challenge IFTTT, the quiet, little-but-huge communicator that stepped in and made the Internet of Things work with… well, the Internet? Luckily, not really. The partnerships continue to roll in, and IFTTT continues to add a layer of creativity otherwise missing. “We feel like IFTTT still adds a level of value,” says Tibbets. “The true nature of what we’re doing is still not on the surface yet. We’re building this foundational layer for future operating systems.”

“We surround ourselves with more and more devices every day, so we need to be able to make them work how we want. We make decisions about how we position our TVs or stack our books. We make tons of creative decisions with our stuff, but there’s no one company helping us do that. I think that level of intuition and lowering of the barrier still has to happen with people when it comes to connected devices.”

Tibbets is doing just that with his own space. He tells me he uses an IFTTT recipe to turn his Hue lights purple when it rains (get it?!?) and orange when a Giants game starts. He’s also got a nice system going where his Withings scale will text his girlfriend his weight when he hits above his target number.

The growth of the Internet of Things—and, thus, IFTTT—raises a chicken-or-egg question: Will the growth of IFTTT and the things we ask it to do inspire the connect hardware market, or vice versa? And like the chicken and the egg, it doesn’t matter.

Tibbets says IFTTT is planning to launch its developer platform this year (it’s currently in beta), making it easier for companies and individuals to leverage the system for their devices. “Another thing we’ve talked about is giving IFTTT users something in addition to what they’re doing now … like being able to use IFTTT to manage multiple Instagram and Twitter accounts.”

And of course, the number of devices IFTTT will let you use its recipes to trigger will increase. But as this confusing, overwhelming, and awe-inducing market grows, Tibbets still sees IFTTT the same way.

“We allow people to make creative connections between their devices. It’s like… a super power.”