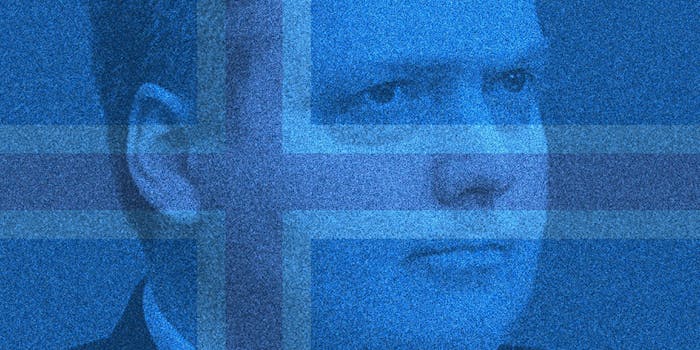 The first political causality of the Panama Papers.

Prime Minister Sigmundur Gunnlaugson of Iceland resigned on Tuesday amid allegations his family hid millions of dollars in an offshore tax haven.

Details about Gunnlaugson’s finances were brought to light on Sunday as part of the so-called “Panama Papers” investigation, based on what’s believed to be the largest leak of private information in history.

Financial records leaked from the Panama-based law firm Mossack Fonseca & Co., known for establishing tax havens on behalf of some of the world’s wealthiest and most powerful individuals, show that Gunnlaugson concealed millions of dollars in an offshore company that held significant investments in three major Icelandic banks during the country’s 2008 economic collapse.

Gunnlaugson, who began a four-year term as prime minister in 2013, failed to disclose his past ownership of the company—and, in fact, denied it—until he was questioned by reporters following the release of the Panama Papers investigation. Gunnlaugson reportedly sold his half of the offshore company, Wintris, Inc., to his wife for $1 a day before a new Icelandic law would have obligated his disclosure.

In the wake of the crippling financial crash, Wintris, Inc., claimed roughly $4.1 million from the failed banks in which it invested. Gunnlaugson, as prime minister, was involved in the negotiations responding to those claims, which has led critics to accuse him of a conflict of interest.

During an interview with reporters on Monday in which Gunnlaugson was questioned about his wife’s offshore holdings, he hastily walked off, accusing the Icelandic reporters of conducting the interview under “false pretenses.” He subsequently said he would not step down. Hours later, thousands of protesters stormed Parliament and demanded his resignation.

Gunnlaugson’s resignation will not affect his leadership of the nation’s center-right Progressive Party, reports Iceland Monitor. In a meeting with party leaders, it was proposed that Sig­urður Ingi Jó­hanns­son, currently minister for Fisheries and Agriculture, become the new prime minister.

This arrangement appears to have further dissatisfied incensed Icelanders, who began gathering outside Parliament on Tuesday afternoon for another round of protests. A recent poll indicates the country’s approximately 330,000 citizens trust Jó­hanns­son even less than Gunnlaugson, with only 3 percent of respondents in a mid-March survey saying Jó­hanns­son is trustworthy. According to the Reykjavík Grapevine, Jó­hanns­son has defended Gunnlaugson since the Panama Papers story dropped, telling reporters, “It is complicated to have money in Iceland.”

President Ólafur Ragnar Grímsson announced Tuesday that he had rejected a request by Gunnlaugson to dissolve parliament in the face of a no-confidence vote and continuing protests.