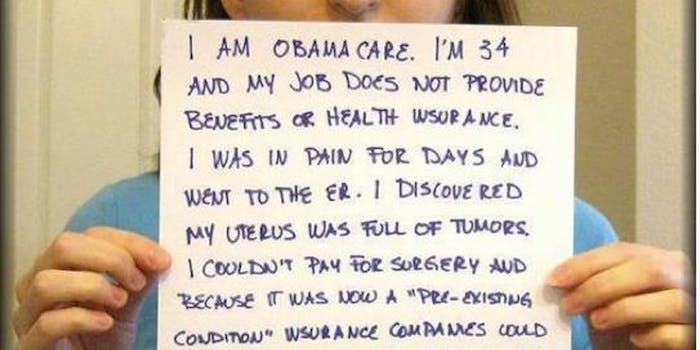 Meet the new face of ObamaCare

With her confessional photo, blogger M. Turner hopes to put a "negative term in a positive light."

A blogger recovering from a massive hysterectomy is proud to be the new face of ObamaCare.

M. Turner, a 34-year-old independent jeweler in the Tampa Bay area, has used her blog to obsessively document her problems paying for health care after a doctor found tumors in her uterus.

Inspired perhaps by the “I am the 99%” images that led some to call the Occupy Wall Street movement the “Tumblr Revolution,” Turner described how her personal story relates to larger politics on a piece of paper, held in front of her face.

My job does not provide me with benefits or health insurance[…]My uterus was full of tumors. I couldn’t pay for surgery and because it was now a “pre-existing condition” insurance companies could (and did!) turn me down for coverage. But because President Obama passed health care reform, I was able to get PCIP insurance and the surgery I needed to get well. Thank you President Obama for helping me live and heal when others said no.

She posted the “I am Obamacare” photo to Facebook in October, where it got over 1,800 likes but stalled out at 676 shares. Last Wednesday, though, another user, who Turner says she doesn’t know, also uploaded the photo with the simple tag “obama care in action [sic].”

This time, it took root. The image has been shared on Facebook more than 19,000 times, and it’s rapidly growing.

“I am very surprised by how viral the image has gone,” wrote Turner, who declined to share her first name, to the Daily Dot. “My blog is pretty quiet,” she wrote. “It’s normally just me, my friends and family on it. January 5th I had 900 page views and so far today (it’s only 11am) I’ve got 2,000. So apparently people are finding me despite the fact almost no one who’s sharing my image knows the source of the image. Thank goodness I watermarked it!”

Turner has also set up a Q&A on her blog about it. Here are some of the highlights.

A. Uh, yeah. That’s kinda the point. I’m using the negative term in a positive light. It helps draw attention to it in a more polarizing way. It’s like an intentional irony.

Q. I thought the Reform didn’t take effect until 2014?

A. In 2014, regular insurance companies won’t be able to drop you or turn you away or disqualify you if you get sick. (Pre-existing conditions are already eliminated for children; adults have to wait a few more years.) UNTIL THEN, PCIP is the gap program between now and then. It gives people access to medical insurance when they normally wouldn’t be able to get it. For details: http://pciplan.com/

Q. Were you paid for this picture?

A. Seriously? *snort* I can’t believe people actually think that. No, no one paid me anything. I’m not affiliated with any campaign or group.

Photo by Given Eyes To See