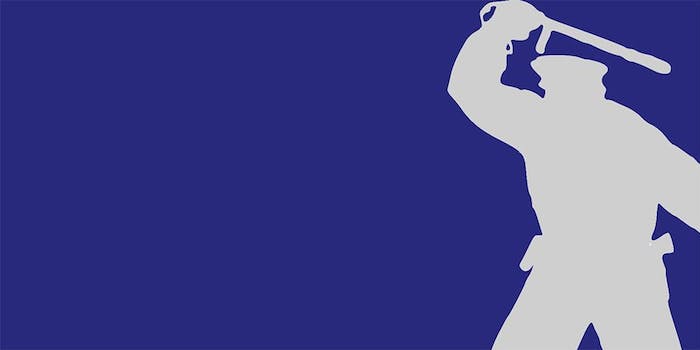 It's just one of the ways Ferguson officers are upsetting the community.

The United States Department of Justice (DOJ) has formally asked police officers in Ferguson, Mo., to stop wearing “I Am Darren Wilson” wristbands while on duty.

The issue initially arose thanks to an image first posted to the Instagram account MediablackoutUSA that shows an officer standing at a Michael Brown protest site with the “I Am Darren Wilson” bracelet visible.

Wilson is the Ferguson police officer who shot and killed unarmed teen Michael Brown in August, setting off a series of protests and clashes between local residents and police.

After the photo began circulating, Missouri Highway Patrol Captain Ron Johnson confirmed that officers had been wearing the writstbands as an “individual statement,” implying that the Livestrong-style bracelets were being worn to show solidarity with their fellow officer. Johnson added that he would “have conversations with those agencies.”

Reuters reports that in a letter to Ferguson Police Chief Tom Jackson, the Justice Department, which a few weeks ago opened its own investigation into events in Ferguson, has requested that the Ferguson Police Department order its officers not to wear the bracelets. From Reuters:

“The letter said the bracelets had “upset and agitated” people and “reinforce the very ‘us versus them’ mentality that many residents of Ferguson believe exists.”

“The DOJ said it had been assured by officials with the county and state police, which have been brought in to help in Ferguson, that their officers would not wear them.”

In a separate letter, the DOJ said they had observed Ferguson police officers not wearing name badges and asked that they begin wearing them. “The failure to wear name plates conveys a message to community members that, through anonymity, officers may seek to act with impunity,” the letter reportedly reads.

Wearing a bracelet that says “I AM DARREN WILSON” means you left your post as defender of the people and took a side against them. #ferguson

Last Thursday, even before the DOJ sent the letters to the Ferguson police force, Ferguson Police Chief Tom Jackson hoped to assuage some of the tension the city’s experienced by issuing a public video apology to Michael Brown’s family, the protesters, and Ferguson’s black community.

In the video, Jackson stated:

“To the people who were upset about what happened in Ferguson and came here to protest peacefully, unfortunately there were others who had a different agenda. I want to say to any peaceful protestor who did not feel that I did enough to protect their constitutional right to protest, I’m sorry. For the people to peacefully assemble is what the police are here to protect. If anyone who was exercising that right feels upset and angry, I feel responsible and I’m sorry.”

He concluded the video by acknowledging the mistrust many feel for his police department and expressed a desire to help heal those wounds:

“I’m also aware of the pain and the feeling of mistrust felt in some of the African-American community toward the police department. The city belongs to all of us, and we are all a part of this community. It is clear that we have much work to do. As a community, a city, and a nation, we have real problems to solve.”