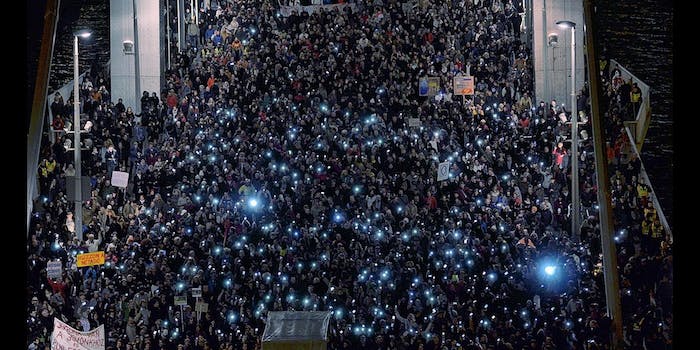 100,000 Hungarian protesters take to the streets over Internet tax

They're fighting the tax by throwing laptops and keyboards at government buildings.

An estimated 100,000 protesters—approximately 1 percent of the country’s population—reportedly gathered in Budapest, Hungary, on Tuesday evening to oppose a government tax on the Internet.,

It was considerably larger than the first protest, on Sunday, though the themes were similar. People are unhappy with a plan to charge citizens 150 Hungarian Forints ($0.60) per gigabyte of data they use, as well as a “compromise” amendment of Ft 700 ($2.87) a month.

The protest also stands as a cypher to growing unrest with Prime Minister Viktor Orbán, who’s grown steadily less popular since his election in 2010. Popular chants at the rally included “Viktor, get lost!”

As was the case Sunday, this protest was largely coordinated with a popular Facebook page with more than 200,000 followers in its now eight-day existence.

Protesters made clear what their immediate concern was, however, with tech-themed actions, like holding their cellphones aloft like lighters, holding up signs that read “ERROR!” and throwing laptops and keyboards at government buildings.

Orban’s administration has denied protestors’ claims that the tax is motivated to censor dissent or make it harder for poor people to get online, and that it’s just struggling to find new sources of tax revenue, Reuters has reported.